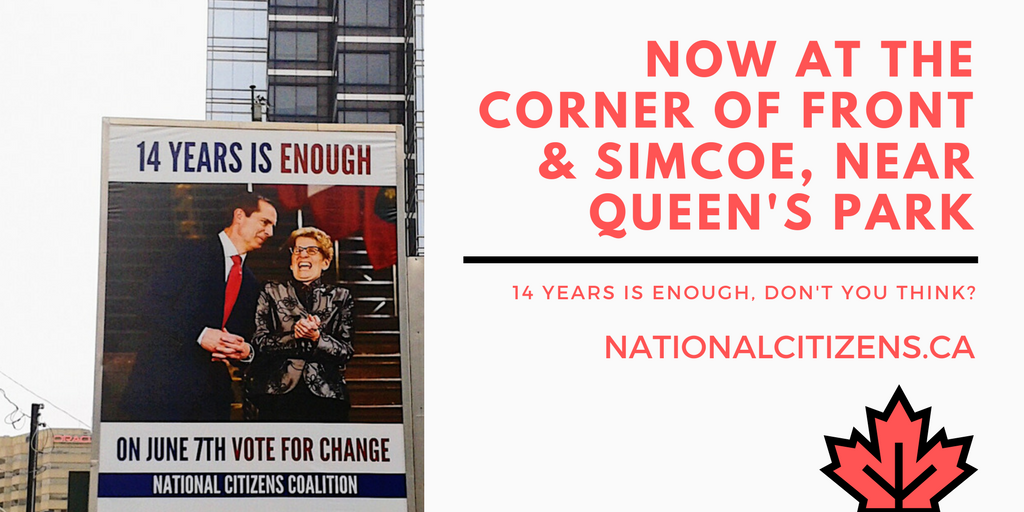 Pictured: Campaign billboard featured at the corner of Front & Simcoe in Downtown Toronto

After 14 years, disgruntled taxpayers know that this Liberal legacy of shame has to end!

Its mere months to go until Ontario gets to vote Premier Kathleen Wynne out of office and we are ramping up our campaign to full speed – It’s time to end this Kathleen Wynne Government and their “Legacy of Shame.”

Here is the situation as it stands:

Premier Kathleen Wynne's approval ratings have sunk to all-time lows - even eclipsing the dismal record of ex-Premier Dalton McGuinty. But make no mistake, the Liberals have been here before and they know how to spend taxpayers’ money on programs designed to get them votes.

Remember the gas plant scandal just before the last election? All designed to get them votes in certain ridings that they needed to win the election, billions down-the-drain be damned!

Now - Let’s take a look at the Legacy of Shame so far:

Families and businesses have been squeezed by increased taxes and by the highest hydro rates in North America.

The provincial debt is $328 billion which works out to over $25,000 for each person in Ontario.

Ontario’s taxpayers are hit for $11 Billion per year just to cover the interest fees on our massive debt.

This government has no real plan to address this out of control spending, in fact quite the opposite, they plan on spending even more on the failed green energy program, and put the bill to us and our future generations with a carbon tax.

This Kathleen Wynne Ontario Liberal government has stumbled from one scandal to another, leaving taxpayers on the hook for billions of dollars in the process. Cancelled power plants, the Green Energy Act, the Orange air ambulances, eHealth, the new carbon tax - the list goes on.

Remember, this is a government that is testifying in court in regards to an OPP investigation.

So here is what we can do about it:

Throughout the coming weeks and months we will expose and focus on the numerous scandals of this Liberal government just to remind taxpayers about the real costs of Kathleen Wynne running this province.

And we need your help!

Your support will go towards radio, print, and online ads we will feature throughout Ontario.

With your generous support we will share this message for the whole province to hear! We will not sit by and do nothing as this Wynne government continues to try to buy votes with shell games like the so called reduction in hydro rates by 25%.... which is just a sneaky way to give us a sliver of our own hard-earned money back! Believe me, we will be paying more…much more for this failed green energy program and the bad contracts they have signed. We expected Wynne to lower the rates going into pre-election mode. She just shifted some of the electricity costs to the general tax base – until she gets elected and raises rates again. This is a typical liberal shell game they play when their poll numbers are going down and they are in damage control.

Please join the fight to end this nightmarish legacy of shame that has been playing out in Ontario for far too long!