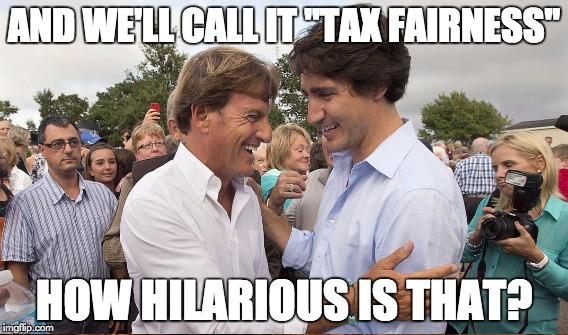 It's another embarrassment for Prime Minister Trudeau. Fresh off a Summer spent alienating Canadian farmers, doctors, and small business owners, a massive investigation dubbed the Paradise Papers has uncovered that many of his top Liberal allies were using far greater loopholes to avoid paying taxes in Canada.

It's news that will remind many of Former Liberal Prime Minister Paul Martin's brush with political turmoil after his own use of tax havens, unearthed in the similarly named Panama Papers. Is there any credibility left from decades of old Liberal aristocracy? As many on Twitter have pointed out, it's one rule for all of Canadians, but another for Trudeau and his government... and while they hid their money in trust funds and offshore accounts, they had the audacity to come after the working class.

There's nothing "fair" about holding Canadians as tax cheats, while turning the other cheek as your friends pay less, but that's Justin Trudeau for you: a leader so hypocritical and out of touch that he still considers himself to be part of the same working class he continues to punish.

The next Federal Election is in 749 days.