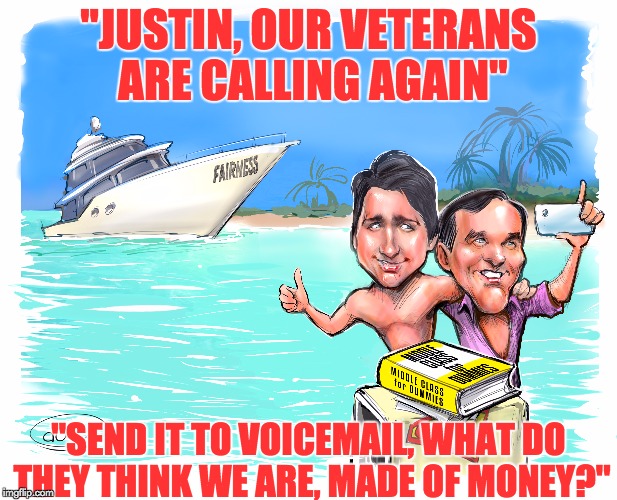 From record-setting reckless spending to terrorist payouts, Justin Trudeau has never met an issue he wouldn't throw money at. Unless of course you're a Canadian that actually served their country.

In a now-infamous town hall from last week, Trudeau decided an appropriate response to a Canadian soldier and war hero that lost a leg was to tell him that he and his fellow veterans were "asking for more than we're able to give right now."

All this from a man who has no problem cutting a $10.5-million check to a convicted terrorist, and takes $215,000 tax-payer funded vacations on private islands owned by billionaires.

In the National Post, John Ivison rightly points out "In truth, there are no gods and precious few heroes on the veterans file... Both Conservative and Liberal governments have been defendants in the Equitas case, in which Ottawa maintains it has no legal obligation to its ex-soldiers."

All this is true, but with Trudeau promising the moon and stars to our veterans-in order to fulfill his lifelong desperate push to fill his father's shoes-he may have finally picked the wrong group of Canadians to lie to.

Forcing Trudeau to be accountable to his word is a near-impossible task, but for the right cause, it may just be possible.

The truth is, when it comes to our veterans, we have more than enough to give right now. Now that's something that all of Canada, and "peoplekind" can get behind.