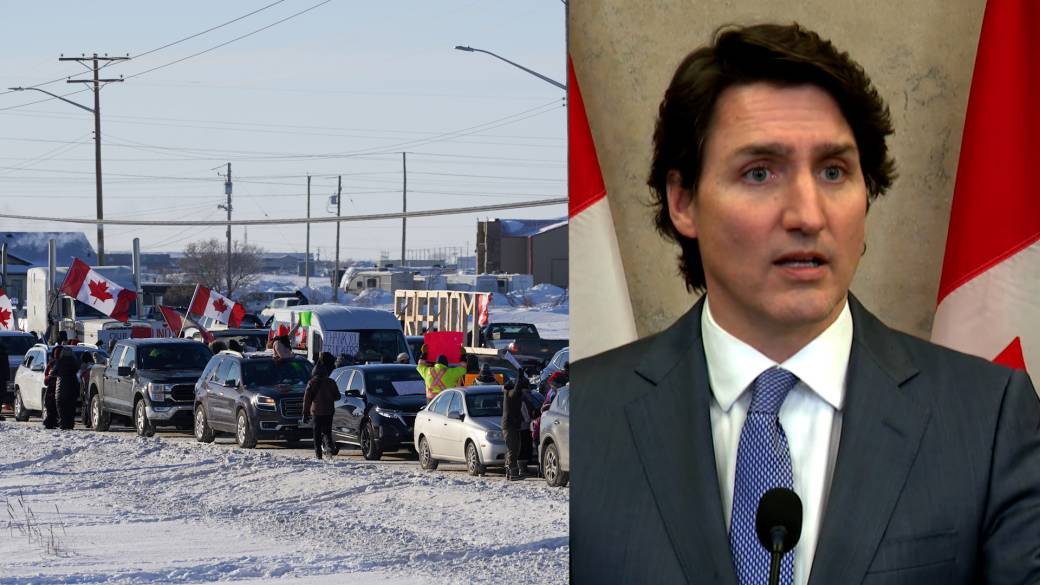 Four things have happened in about the past two weeks that demonstrate how rapidly things are changing in this country.

First, there is the growing Freedom Convoy movement across the nation.

On Saturday, I attended the Freedom Rally in Winnipeg in front of the Manitoba Legislature.

Here’s what I saw:

A large group of boisterous, happy, welcoming, and patriotic Canadians of all backgrounds.

The biggest thing that stood out was how many people were smiling, and how big those smiles were. This is being repeated throughout the nation at rallies and gatherings.

After years of governments trying to keep us afraid, angry, divided, and isolated, it turns out that being happy and gathering is one of the best ways to show our defiance.

You could sense how happy people were to see like-minded Canadians willing to stand up for our rights and freedoms, rather than just meekly going along with whatever new dishonest edict is handed down by those in power.

There is tremendous power in this, as a supposed ‘small, fringe minority’ has gained the attention of the world and caused panic among our corrupt statist politicians.

That same ‘fringe minority’ also turned out to be representative of Canadian public opinion, as shown by an Angus Reid survey revealing 54% of Canadians want all restrictions lifted.

Perhaps that is part of why Justin Trudeau continues to hide, as he’s shocked to find out that he and other power-obsessed statists are now in the minority in this country.

The establishment press also appears shocked. Despite all their efforts to falsely smear the convoy as hateful, convoy participants haven’t co-operated with that narrative as the atmosphere at rallies across the nation looks far more like a party than anything else.

And here’s the deeper issue behind all of this:

After years of lies and fear-mongering by politicians like Justin Trudeau and by the establishment press, the truth is finally breaking through and winning.

That leads us to the second big development.

The release of a meta-analysis by a professor at John Hopkins University, Lund University, and an advisor from the Copenhagen Center for Political Studies, has further decimated the case for lockdowns.

In a study of the United States and Europe, the researchers found "While this meta-analysis concludes that lockdowns have had little to no public health effects, they have imposed enormous economic and social costs where they have been adopted," they wrote. "In consequence, lockdown policies are ill-founded and should be rejected as a pandemic policy instrument."

"We find little to no evidence that mandated lockdowns in Europe and the United States had a noticeable effect on COVID-19 mortality rates," they add.

Notably, the study also discussed the consequences of lockdowns, something that has been largely absent from debate in Canada.

Among those consequences have been the damage to children from reduced interaction and schooling, surging domestic violence, and a huge increase in drug overdoses.

Of course, we also know that lockdowns have led to higher obesity rates, which put people at higher risk of negative outcomes if they do contract the virus.

With this study, and the wider pushback against the government narrative, there is finally a real debate taking place in Canada about the consequences of the draconian authoritarian policies we’ve been subjected to, and this is leading to tangible changes.

Alberta and Saskatchewan have both announced they will be removing their vaccine passports, in what would truly be a return to normal.

Public health officials in other provinces – including Ontario – have publicly questioned vaccine passports, even admitting that it is time to realize that covid is endemic and something we must live with, rather than endlessly try to contain, and fight.

We are seeing that among the general population, fatigue is now overtaking fear, as Canadians are increasingly fed up with the ever-shifting demands of those in power and want to be free to choose our own level of risk, rather than have power-hungry authoritarians like Justin Trudeau make that choice for us.

The last significant development in recent weeks is the Conservative base having rebelled against Erin O’Toole, pushing CPC MPs to remove him.

Many CPC MPs had remained connected to the base, clearly wanting to take a decisive stand in opposition to vaccine mandates, vaccine passports, and lockdowns.

But under O’Toole, the CPC base, and the views of many CPC MPs, were being suppressed, in favour of the wishy-washy, vacillating positions of the party leadership.

The power of the freedom convoy was that the grassroots energy made it impossible for the CPC to get away with keeping their positions vague and evasive, leading to a moment of decision.

Now, with O’Toole gone, the CPC is led by Candice Bergen, who expressed her support for the Freedom Convoy and who has been far tougher in opposition to Trudeau’s authoritarianism. Bergen once even ripped Trudeau for trying to make Canada into a Communist Dictatorship, showing that she clearly understands the threat he poses to freedom in this nation.

Pierre Poilievre – who had been advocating for sound money and limited government even when O’Toole was trying to turn the CPC into a Liberal-lite party – is now the undisputed front-runner for the CPC leadership.

Poilievre has also expressed support for the Convoy, and – unlike O’Toole – strongly pushed back against the false narratives of the state-run establishment press and stood up for the Patriotic Canadians who are fighting for our rights and freedoms.

This represents a massive defeat for the corrupt establishment.

They wanted the rise of authoritarianism to go unchallenged, and clearly wanted to normalize lockdowns, restrictions, and the denial of our rights. They could only do that by keeping the freedom-loving CPC base silent, and they almost succeeded due to O’Toole’s attempts to appease legacy media types.

But now, the pro-freedom, limited-government views of the CPC base are in the ascendancy, and the party has been forced to respond.

For a long-time over these past two years, voices like the National Citizens Coalition seemed to be alone when it came to defending our rights and freedoms. But that willingness to speak out – even when it wasn’t popular – has helped to give more and more Canadians the courage to ask questions, push back on the dominant narrative, and find the strength to defend our rights.

Now, that principled stand is paying off, as energy and truth are with those who oppose restrictions. Those who are against freedom are now on the defensive, as the majority of Canadians want restrictions to end, and as the convoy shows Canadians are done being meek and submissive, instead choosing to speak our minds and defend our freedoms without apology.