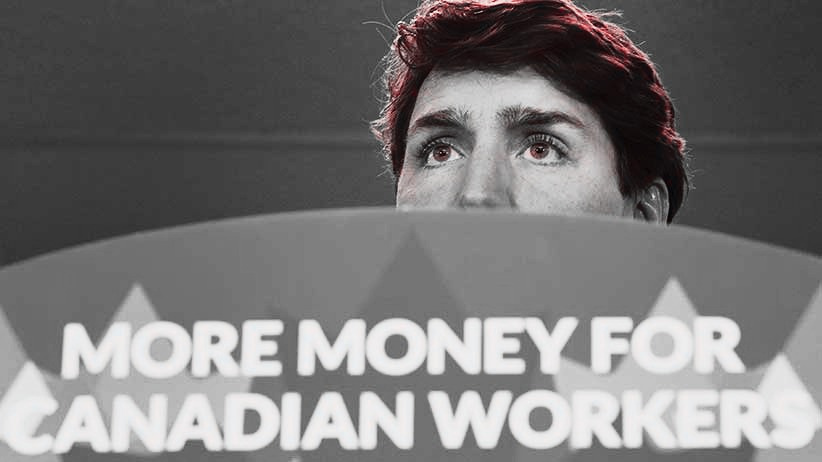 If the Trudeau government announced a new 5% tax on everything, would Canadians be happy with it?

In fact, the Liberal government would likely face a huge drop in popularity, and mounting public outrage would force them to backtrack.

They would face a lot of anger from across the political spectrum, including from the left, who would point out how ‘regressive’ a new tax on everything would be.

After all, millionaires and billionaires could more easily absorb such a tax, as their spending on basic items (food, clothing, transportation) are a diminishing portion of their overall income the higher their income rises. Of course, their consumption would still decline, weakening the overall economy.

Meanwhile, for those who have a smaller income, basic necessities are a larger portion of their overall spending, meaning a 5% tax on everything hits lower-income people the hardest.

Politicians like Justin Trudeau claim to be ‘progressive,’ and that is a big part of his brand.

Yet, we are now watching the equivalent of a regressive tax being imposed on everything.

According to state institutions, Canada’s inflation rate is 4.7%. Many doubt that number, as the rise in prices appears to be much higher, and it is well-known that statist politicians have a clear interest in downplaying inflation and keeping the reported number as low as possible.

Whatever the true rate is, it is clear that prices are rising quite rapidly.

However, even that is a bit of a misnomer.

It’s not really that ‘prices’ are going up, rather the value of our money is going down.

This is the danger of fiat currencies that aren’t linked to anything scarce or tangible. It becomes impossible for most people to accurately gauge how the value of their money is changing, and it can only be seen in relation to the cost of goods & services.

As a result, people can be subjected to the equivalent of a large tax on everything, without realizing it.

That’s the point I made at the outset.

People would be enraged if the Trudeau government announced a 5% tax on everything, as it would represent a 5% drop in their earning power.

Yet, with inflation likely even higher than that, the same drop in earning power is taking place.

It is merely ‘hidden,’ and far less obvious to most Canadians.

This is the consequence of the statist, big-government policies of Justin Trudeau, and the way the Bank of Canada has enabled those policies through rampant money printing.

Note, this isn’t about the temporary increase in government spending when the initial lockdowns took place.

When the government ordered people to stay home, effectively shutting down a large portion of the economy, it would have been morally reprehensible if they hadn’t compensated people for the consequences of government action.

But now, we are a year and a half removed from that initial period.

The Bank of Canada continued to fund that agenda, through a historic increase in the money supply.

It was inevitable that this would result in high inflation, since you have more and more dollars chasing a supply of goods that isn’t growing at anywhere near the same proportional pace of the money supply.

And now, even with high inflation slamming Canadians, the Trudeau government continues to double down on government intervention and higher spending, prompting warnings that they will make inflation even worse:

“Prime Minister Justin Trudeau’s government is at risk of adding to Canada’s inflation problem if it unveils more big-ticket spending measures this fall, a Bank of Nova Scotia economist said in a note to clients.

Finance Minister Chrystia Freeland is expected to give the government’s first major statement on taxes and spending since Trudeau’s Liberal Party won re-election on Sept. 20, including tens of billions in new spending. She should refrain from adding that stimulus to an already hot inflationary environment, Scotiabank’s Rebekah Young said Monday.”

With the Bank of Canada having only recently woken up to the danger of prolonged inflation – after claiming it was ‘transitory’, Trudeau’s policies could undo any corrective efforts:

“New spending ‘could potentially exacerbate the pressures we are seeing right now on the inflation side,’ she said. ‘So they could make the job more difficult for the Bank of Canada if they go out with a whole lot more.’”

It is essential for Canadians to realize that while inflation is certainly hurting them, Justin Trudeau views it as a feature, not a bug.

Higher inflation enables political corruption (more fiat in the hands of politicians can be given to those who do their bidding), makes people more dependent on the state, discourages the growth of the private sector, and helps to conceal government action that is lowering our standard of living.

We are witnessing a sustained attack on the economic freedom and individual freedom of Canadians, and inflation is the greatest weapon wielded by statist politicians like Justin Trudeau.