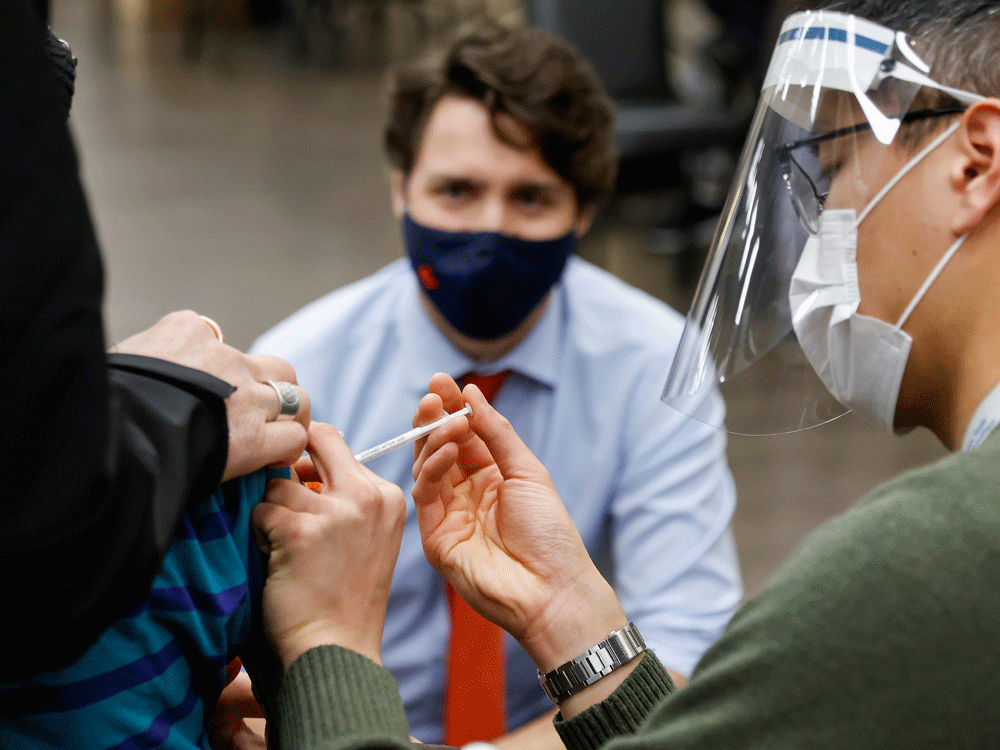 There it is folks.

The moment we knew was likely coming, but had hoped wouldn’t arrive.

With an election about to begin, the Trudeau Liberals have decided that throwing the Charter of Rights & Freedoms into the garbage is a winning message.

And given how much of the country has succumbed to fear, and given how meek the ‘opposition’ parties have become, they may just be right.

To start with, the Liberals are requiring all federal workers, and workers in many federally-regulated industries to be vaccinated.

It’s a vaccine mandate that will apply to roughly 300,000 people.

But that’s not even the most disturbing part.

“Vaccination is our best tool to keep each other safe and to beat COVID. That’s why our government will require all federal public servants and employees working under federally regulated air, rail, and marine transportation sectors to be vaccinated.”

“The vaccination requirement will extend to certain travellers. This includes all commercial air travellers, passengers on interprovincial trains, and passengers on large marine vessels with overnight accommodations, such as cruise ships.”

“We also expect that Crown Corporations and other federally regulated sectors require vaccination for their employees. By working together, we will ensure we build back better from the pandemic.”

So, if you want to get on a plane, get on a train, or get on a boat, you have to do what the government tells you and get vaccinated.

This is being imposed despite over 80% of our population having at least one dose of the vaccine, and represents yet another example of the goalposts shifting.

Remember when they said that 60-70% would be enough for things to go back to normal?

Then it got changed to 70% and above.

In fact, Alghabra said Canada “must do better,” in terms of vaccination rates, leaving people wondering what exactly he means by that.

Increasingly, it appears the Liberal government is demanding full compliance, zero individual choice, and plans to force everyone to get vaccinated by taking away the freedoms of those who choose not to.

They have gone full authoritarian, exploiting fear as relentlessly as they possibly can, when they could easily be tamping down the fear and noting that the huge drop in deaths is quite hopeful.

Of course, the whole point of a vaccine is that it offers protection to you, so it really shouldn’t be anyone’s concern what choice others make. And even those who get Covid after being vaccinated are experiencing far fewer negative outcomes, again another reason to be optimistic.

As I’ve noted elsewhere, I have been vaccinated, as that was the choice I made. I respect others who make that choice, and those who make a different choice. My choice shouldn’t impact what others are free to do.

But that’s exactly what the Liberals are doing by implementing these mandates and internal vaccine passports.

They are eschewing facts, ignoring optimism, and doubling-down yet again on fear.

They are also throwing the Charter of Rights and Freedoms in the garbage.

Internal vaccine passports clearly violate privacy, and are clear examples of discrimination. And mandating workers get a vaccine to keep their job will certainly violate union contracts in the federal service, as it amounts to a new condition of employment that is being imposed out of nowhere.

And yet, this country increasingly seems willing to simply change all the rules, look the other way, and retroactively justify obvious infringements on freedom out of fear.

That brings us to the Opposition.

You would think that a ‘conservative’ party would vehemently oppose internal vaccine passports and vaccine mandates.

You would think Erin O’Toole would make it one of the key fights of the campaign.

After all, Canada has two federal parties that are outright statists (the Liberals & NDP), so it would be absurd to have a third one.

Furthermore, if you call yourself a ‘conservative’ party, then you are supposed to be about limited government, and the defense of individual rights and freedoms.

To go along with internal vaccine passports, and to support vaccine mandates would be to completely betray any sense of ‘conservatism’ within a party carrying that name.

And to boot out candidates for opposing vaccine passports would rightfully be seen as betrayal of core conservative principles.

Yet, that is exactly what the CPC did, removing Yukon candidate Jonas J. Smith after he expressed opposition to mandatory vaccines in the workplace and opposed vaccine passports.

If that isn’t strange enough, the CPC then appeared to take a similar position to Smith, but in about the vaguest way possible.

Nowhere in the statement does the CPC actually say they oppose vaccine passports, or oppose vaccine mandates, though the idea must be that they are implying that by saying ‘Conservatives support Canadians right to determine their own health choices.’

That raises this question:

If the CPC opposes vaccine mandates and vaccine passports, why not explicitly say that?

Why remove Jonas Smith if he was expressing views that align with the party?

And, if the CPC doesn’t oppose vaccine mandates and vaccine passports, why issue any statement at all?

Why not just admit they support the Trudeau/NDP policy on vaccine passports and vaccine mandates?

Make no mistake, the CPC having some ambiguity on the issue, and expressing some opposition (perhaps?) to the authoritarian move by Trudeau does make them slightly better than the Liberals and NDP, it’s just sad that this is what it has come down to: Obvious authoritarianism vs uncertain vagueness.

From a strategic perspective, the unfortunate reality is this mealy-mouthed, have-it-both-ways approach is destined to simply anger everybody all at once, with core conservative supporters angry at the lack of a strong and clear defense of individual rights and freedoms, and Liberal/NDP supporters angry because the Conservatives won’t full out support draconian measures.

Canadians deserve better than this.

We deserve a real debate, a real discussion, and a real, strong fight about our rights and freedoms, not a fake consensus imposed on us by politicians who are either power hungry, cowardly, or both.

Clearly, it now falls to organizations like the National Citizens Coalition, and freedom-loving Canadians like you to lead this fight, since much of the political class has given up entirely.