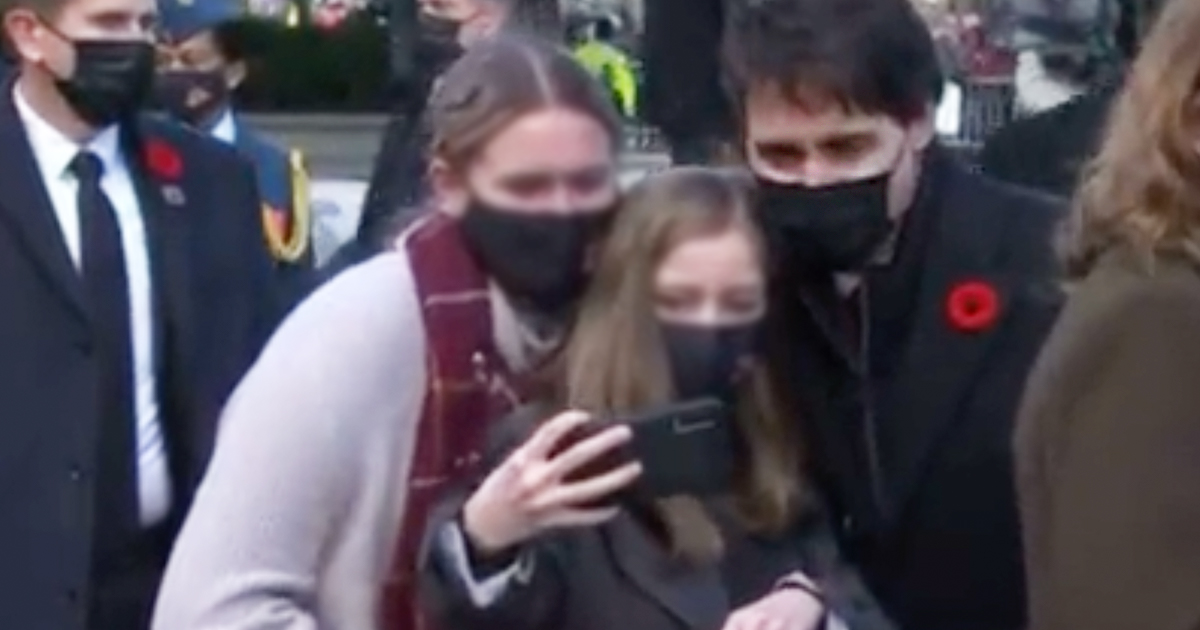 After attending the COP26 conference and making a bunch of promises to wreck Canada’s resource economy, Justin Trudeau followed it up with what many are calling a disrespectful appearance at a Remembrance Day ceremony.

First, he showed up 5 minutes before the ceremony began, with the RCMP stating this was due to a ‘suspicious package’ found near the site.

Then, the arrival of the Governor-General interrupted the 2 minutes of silence.

Finally, Trudeau took a bunch of selfies after the event.

Taken on their own, each of those things could be overlooked.

And another politician may not have faced the criticism that Trudeau is getting.

But Justin Trudeau doesn’t get the same benefit of the doubt because a lack of gravitas and respect towards the country have been consistent trends of his time in office.

In fact, Justin Trudeau’s disrespect towards Canada continues to deepen.

A key aspect of effective leadership is an ability to recognize when short-term political gain will lead to damaging consequences for the jurisdiction you govern.

Ironically, Justin Trudeau once recognized this.

At one point, he spoke about how the politics of fear and division can win an election but then causes serious damage to the country going forward.

He was absolutely right.

However, once Trudeau grew afraid that the 2021 election wasn’t working out for him, he proceeded to launch the most divisive campaign strategy that has been seen in a long-time.

Trudeau launched into his ‘those people’ rant, and the rest of the campaign was based on dividing the country and ramping up the fear.

It worked, showing Trudeau had knowingly exploited fractures in the country to hold on to power.

That disregard for the consequences demonstrates manifest disrespect for Canada and the future of the country.

And it gets worse.

Running a divisive campaign would be bad enough, ruthless and negative campaigns are to be expected, since they so often work.

Far worse than running a negative campaign is governing in such a way that the country itself is split apart, with certain regions exploited while simultaneously being demonized and scapegoated.

During the COP26 Conference, Trudeau promised to cap emissions in the oil & gas sector.

Trudeau’s move comes at a time when countries like China are planning to expand coal production.

Further, Canada’s emissions have been declining since 2005 (they declined under the Harper government without a national carbon tax), showing that Canada is not the problem when it comes to global emissions.

But, acknowledging that reality wouldn’t have allowed Trudeau to play the virtue-signalling game he loves so much.

Of course, while it’s just a game to Justin Trudeau, the negative consequences are real for the Canadian People.

With carbon tax increases every year, the cost of living rising, energy costs surging and the Bank of Canada printing tons of money to ‘pay’ for rampant overspending, Trudeau’s virtue-signalling is proving immensely costly.

And the cost isn’t only seen in the economy.

Our national unity is withering away.

Alberta has already voted against the equalization program that unfairly leeches money from that province.

Now, Saskatchewan is talking about becoming a ‘nation within a nation,’ a reasonable move considering that the Trudeau government is targeting the economy of the West even as he maintains a system that takes wealth from the West.

Provinces like Alberta and Saskatchewan have tried having reasonable discussions with the Trudeau government in defense of their economic interests.

Meanwhile, a province like Quebec continues to get what it wants through strong assertions of identity, and the implicit threat of separation.

People will do what works.

So, if the Liberal government is unwilling to listen to reasonable discussion, and instead rewards aggressive responses, it’s no wonder that Alberta and Saskatchewan are going to take a more aggressive approach.

Justin Trudeau has chosen to put his short-term political gain, and his international political image, ahead of the economic interests and national unity of the country.

By comparison, Trudeau’s predecessor Stephen Harper did not.

All areas of the country, and all industries across the country were championed by the Harper government, and it is notable how separatist sentiment collapsed in Quebec, and remained dormant in the West during Harper’s time in office.

Whatever else people may have thought about Harper, he had a level of gravitas and understanding of his broader responsibility that Justin Trudeau manifestly lacks.

As a result, the country under Justin Trudeau is more divided, less secure, and more economically vulnerable than when he first took power, and that trend will only continue as Trudeau’s time in office causes more and more damage to our nation.