For all the talk about ‘foreign financing,’ Trudeau has imported foreign-style authoritarian governance. 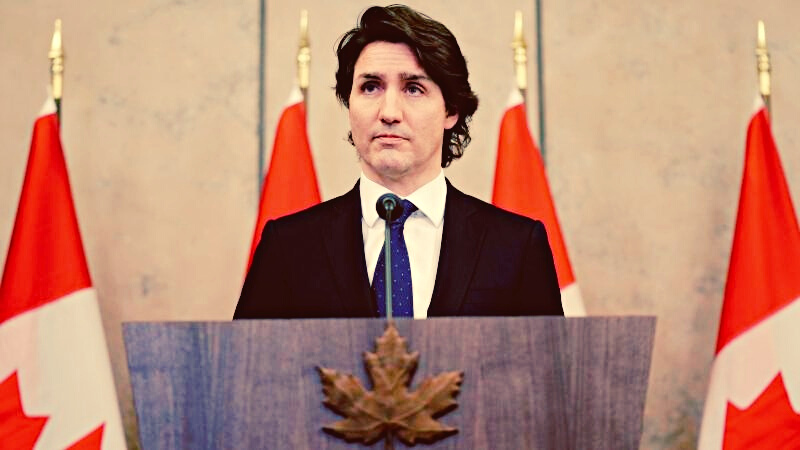 Before Justin Trudeau took office, he expressed his support for China’s ‘Basic Dictatorship,’ because it could ‘get things done.’

As he said it, he realized the mask of the hip progressive had slipped, so he quickly tried to cover it up by claiming Stephen Harper would love that kind of power.

But for all the hyperventilating about Harper’s supposed dictatorial tendencies, nothing he did comes even close to what we’ve witnessed from Justin Trudeau.

No, it was never Stephen Harper who was a wannabe dictator, it was Justin Trudeau.

And here we are.

Following an election in which he ‘won’ the lowest percentage of the popular vote of any party leader to win the most seats (breaking his own ‘record’ from 2019), Justin Trudeau doubled-down and tripled-down on the divisive rhetoric and discriminatory policies he used in the last campaign to narrowly hold on to power.

As the rest of the world and much of Canada has moved towards opening up, ending restrictions, lifting mandates, and getting rid of the vaccine passports, Trudeau went in the opposite direction.

Trudeau imposed a vaccine mandate on truckers – a solution for a non-existent problem considering there were no issues with truckers spreading covid – clearly wanting to further inflame divisions and cause a new crisis to justify a further authoritarian power grab.

In their remarks imposing the Emergencies Act and shredding whatever remnants of the Charter remained, Justin Trudeau and Chrystia Freeland spoke a lot about so-called ‘foreign financing’ of the protests and blockades.

Why is that a concern for them all of a sudden?

Was it a concern when foreign financing was used to try and crush the energy sector in Western Canada?

Was it a concern when foreign-financed operations flooded our country with fentanyl and caused – and continue to cause – thousands of deaths?

Was it a concern when foreign interests in China used fear and intimidation to try and control Canadian Citizens of Chinese-descent?

Was it a concern when foreign money completely distorted our housing market and made homes unaffordable for a huge segment of Canada’s largest generation?

Was it a concern when Canada is seen as such an easy target for money laundering that the ‘Vancouver Model’ is used as an example of a nearly unfettered market for those activities?

None of that was a concern.

It’s all gone on, and keeps going on at this very moment.

It’s only a concern now when a protest is made up of people who don’t approve of Justin Trudeau.

And don’t just take my word for it.

Here’s Justin Trudeau admitting that using Emergency Powers is about ‘sending a message,’ something that is explicitly NOT the reason those powers are supposed to be used:

“Disgraceful. We all know that there is no justification for the heavy handed use of the Emergency Measures Act. But here Justin Trudeau acknowledges he’s using it to punish people without due process. He’s bragging about circumventing our justice system.”

The fact is, this isn’t a National Crisis.

The police were already able to clear the Ambassador Bridge blockade with existing tools.

They didn’t need the Emergencies Act.

The Police Chief in Ottawa resigned, and the force had repeatedly asked for more officers while lacking any plan for deploying them. That’s a problem of poor leadership and planning, and again doesn’t comprise a national emergency.

The Coutts blockade ended peacefully, with protestors hugging the police as they left.

The Emergencies Act wasn’t required there either.

So what is really going on here?

Now, we come back to the issue of ‘foreign financing.’

Here’s the real foreign import we should be worried about:

Trudeau has long expressed support for Communist Dictatorships, not only through his remarks about China, but in his fawning over Fidel Castro.

Why else would Trudeau – who previously said about the Boston Bombers (foreign terrorists) that their actions were a result of ‘exclusion’ and that ‘root causes’ needed to be found for that ‘exclusion,’ – starkly refuse to meet with Canadian citizens who oppose his policies?

Why would he demonize them at every turn, using the most hyperbolic and aggressive language he could?

Why would he – in the middle of the protests – have his government officials muse about an interprovincial vaccine mandate for truckers, a move that can only be seen as a ruthless and deliberate escalation?

Like Xi and Fidel and other authoritarian leaders past and present, Trudeau sees a crisis as a chance to generate further fear and chaos, so he can then ‘step in’ with expanded government power to ‘solve’ the crisis he himself inflamed.

Now, it’s time for all Canadians – particularly those in the Liberal Party who actually think ‘Liberal’ is supposed to mean something – to stand up and speak out against Trudeau’s authoritarianism before his failed leadership fully tears this country apart.