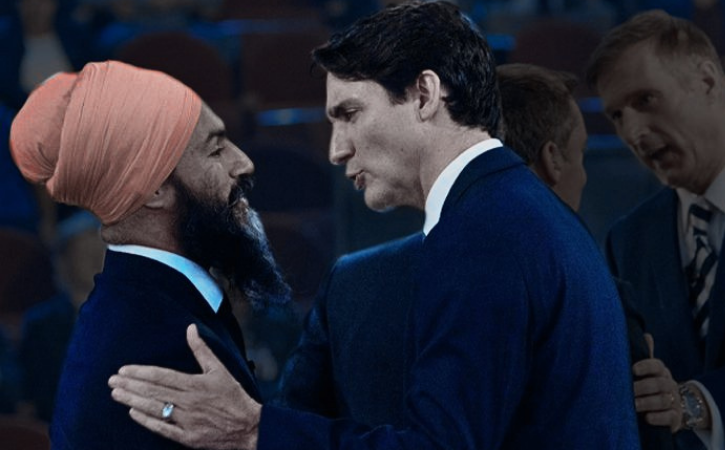 It has finally happened.

The NDP has dropped all pretense of being an opposition party.

By forming a de facto coalition with the Liberals, and promising (on the surface) to keep Justin Trudeau in power until 2025, the NDP will become Trudeau’s full-time enabler and supplicant.

Apparently, being humiliated and manipulated on the Emergencies Act wasn’t enough for Jagmeet Singh to realize the true nature of Trudeau’s ‘governing style.’

Canadians are now paying the price for Jagmeet Singh’s severe mismanagement of the NDP, a party that has struggled to raise money and, even during elections, seemed unwilling to offer anything but tepid opposition to Justin Trudeau’s agenda.

Of course, during the election campaign Jagmeet Singh said there would be no coalition, and his party has tried to pretend they are separate from the Liberals.

Trudeau has tried to cast this coalition as a move beyond divisiveness, yet it will accomplish the exact opposite.

Trudeau will be doubling-down on the policies that have led him to be the least popular ‘election winner’ in Canadian history, having lost the popular vote twice in a row.

Given what is happening in Europe, there is a growing consensus in Canada that we need to build up our military and unleash the full potential of the energy sector.

Trudeau could have found accommodation with the Conservatives on those issues, while also reducing the feeling of alienation in the West.

If the Liberals and Conservatives had been able to work together on those key issues, it would have represented roughly 65% of the country, creating some much-needed unity.

But that would have required Trudeau to acknowledge the legitimacy of real opposition and admit that his past policies have led to serious problems.

Instead, he chose to form a coalition with the NDP that will enable him to go even further in pursuit of a big government and centralized power agenda, while ‘freeing’ him from much of the accountability and oversight that previously existed.

After all, what incentive do NDP MPs have to hold the Liberal government accountable in committees?

Why would they work with other opposition parties when it comes to demanding transparency and legitimate debate?

This Liberal-NDP coalition holds dire implications for freedom of speech in this country, and we have a big fight ahead.

Under Justin Trudeau and Jagmeet Singh, the Liberals & NDP have both embraced a hostility towards free speech, favouring an expanded government role in ‘keeping people safe,’ AKA controlling what we can see and say online.

This has also extended to rigid control over MPs, as both the Liberals and NDP expect their members to adhere to a narrow worldview.

Those who dissent – like Joel Lightbound – are forced back into line, which we saw when Trudeau insinuated the Emergencies Act vote was a matter of confidence.

The only leverage had by individual MPs within the Liberals and NDP was the minority government. Their voices and their votes were badly needed.

I say ‘had’ a minority government because Canada now has a Liberal majority, with part of the Liberal Party pretending to be a separate party.

Devastating for the economy

Whatever we want to call it, whether it’s a Liberal majority or a Liberal-NDP coalition, we know that it will be devastating for our economy.

With inflation surging, gas prices through the roof, and looming price pressures caused by Russia’s war on Ukraine, what Canada needs is clear:

A large tax cut to put more money in the pockets of Canadians.

Elimination of the carbon tax.

Fiscal responsibility and a freeze on federal government spending – aside from the necessary military build-up.

But with a Liberal-NDP coalition, what we are likely to get is the exact opposite.

They will further strangle the energy sector.

They will keep raising the carbon tax.

Spending will surge even more.

And though you may think that Russia’s aggression would wake people up to our need for a strong military, it was notably absent from the Liberal-NDP deal.

Add to that the aforementioned assault on free speech, and it’s clear that the worst nightmares of all of us who value fiscal responsibility and limited government have come true.

We now have a big fight on our hands to stand up for our values and our rights. But fight we must.