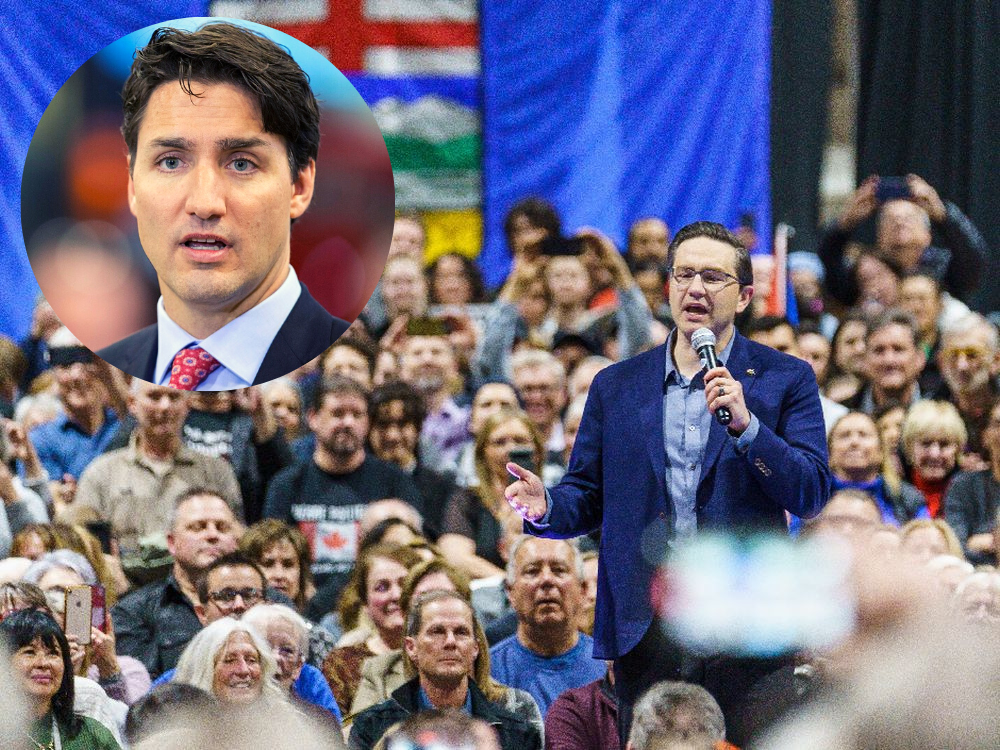 What is the bigger story?

The Liberal government using our taxpayer dollars to hire a vicious anti-Semite to lecture our country about ‘racism’ and help shape their censorship policy for state media?

Or Pierre Poilievre shaking someone’s hand at an event in which he shook hundreds of hands?

It’s not a tough question, and all common-sense Canadians know the answer.

Unfortunately, that same common sense is absent among much of our legacy media.

In what is highly suspicious timing, a significant segment of the Canadian establishment press has chosen to go all-out attacking Pierre Poilievre for shaking someone’s hand at a campaign event, at a time when the Liberals are under intense and growing criticism for funding an anti-Semite.

It’s a tactic as old as politics itself: When your ‘team’ is in trouble, you throw out a bunch of attacks against your opponents, hoping something sticks.

The goal isn’t to ‘win,’ it’s to muddy the waters.

Rather than people just focusing on the Trudeau government hiring an anti-Semite, they’ll also focus on the guilt-by-association narrative against Poilievre.

But here’s the thing:

It would be understandable if the Liberal Party were doing this, since that would be part of the ‘political game.’

When the media does it, however, it truly demonstrates how much they serve as an extension of the Liberal government, rather than being the trustworthy institution they claim to be.

Unsurprisingly, but disappointingly, Jean Charest has joined in on the last-minute desperate attacks against Poilievre.

As he has through most of the campaign, Charest has strangely spent lots of time criticizing Poilievre for offering conservative ideas to the challenges facing Canada, while largely giving Justin Trudeau a free pass.

Now, his team is helping to amplify and spread the establishment media’s attacks on Poilievre, providing fodder for the Liberals in the upcoming general election and helping the media distract from the Liberal anti-Semitism scandal.

And what a scandal it is.

While the Liberals have said that taxpayer funding will no longer go to Laith Marouf, they are facing more questions about why he was ever given our tax dollars in the first place.

How could there have been such a complete and total absence of vetting to allow Marouf to get access to government grants?

And why didn’t Ahmed Hussen and the Trudeau government act sooner?

Liberal MP Anthony Housefather – a Liberal MP who is well-respected across the political spectrum – said that he had been warning Hussen about Marouf for some time:

“I said the contract had to be cancelled. I alerted him and I persistently communicated with the minister in his office, from the day I learned about it, until today, and aggressively demanded that action be taken,” he said.

“Action could have been taken more quickly.”

Housefather said he was “very pleased that the minister and his office had been collaborative with me but I believe that the action should have been taken more swiftly.”

Housefather said if it were up to him, “it would have been done the moment anybody became aware of this, but I’m happy with the end result.”

The fact that Housefather had to fight and advocate for a vicious anti-Semite to be removed from a government contract tells you everything we need to know about the Liberal government.

It should have been an instant, no-brainer decision, but it would seem some hateful, fringe-left attitudes are coddled within the federal government.

And remember, this is the same government that absolutely loves to demonize their opponents as ‘bigots’ and ‘racists’ while lecturing the rest of us on how to be ‘inclusive’ ‘progressive,’ and ‘woke.’

We have thus learned something very important about how politics will unfold in this country for the foreseeable future.

No matter what they do, the establishment media will not allow the Liberals to have a negative news cycle without also attempting to make the news cycle negative for the Conservatives.

They’ll grasp straws and make any dubious leap of logic they need in order to ensure something ‘just as bad’ is found about the Conservatives whenever the Liberals are under pressure.

Thus, it will come down to each of us, in pro-freedom organizations like the National Citizens Coalition and in independent media, to perform the important and essential task of standing up for the truth in the face of outrageous smears and false equivalencies.