They’re Deliberately Making Inflation Worse, Yet The Arrogant Liberals Feel Entitled To Lecture You About It 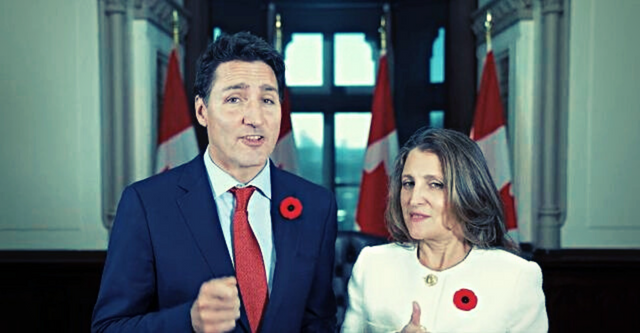 It’s one thing for a government to be out-of-touch and tone-deaf about a problem they had nothing to do with.

It’s yet another thing to be out-of-touch and tone-deaf about a problem a government has deliberately made worse.

So, to see Chrystia Freeland offering condescending ‘advice’ telling Canadians we should cancel Disney+ raises the question of why the Liberals still have such an entitled attitude.

As we know, the high inflation we are seeing in Canada today has been caused and exacerbated in large part by deliberate policy choices made by the Liberals.

The Liberals chose to implement a carbon tax.

They chose to raise the carbon tax above their originally-promised limit.

They chose to vote to triple the carbon tax going forward.

They voted against cutting the gas tax to provide relief to Canadians.

They voted against removing the carbon tax from home heating.

They have sought to strangle the Canadian energy sector, deepening our dependence on foreign energy and driving up prices further.

They stood in the way of Canada expanding energy exports to our desperate allies in Europe, and have overseen the cancellation of $150 BILLION in energy projects over the past 7 years.

Why mention all of this?

Because this is evidence that the Liberals have deliberately sought to drive up prices.

They have rejected every chance they had to bring prices down.

And we haven’t even discussed how their inflationary overspending has made things worse.

Along with their enablers in the Bank of Canada, the Liberals have flooded our economy with borrowed money while simultaneously disincentivizing production.

It’s basic common-sense, so why don’t the Liberals seem to understand it?

Well, the fact is that their entire world-view and their political interests require them to not understand it.

Understanding it would be to acknowledge that they made inflation worse, and are deliberately making it worse.

It would require them to admit that constantly spending more money to ‘solve’ inflation only causes further inflation.

That would be politically devastating for them, and would represent an admission that their chief rival – Pierre Poilievre – was 100% correct about the danger of money printing and excessive spending.

But the problem with avoiding reality in one area is that sometimes you forget where to draw the line, and it seeps into all areas.

The Liberals have spent so much time blaming inflation on everyone and everything else, and acting like they had nothing to do with it, that they seem to have forgotten that they are running the government of a G7 country.

Freeland’s ‘advice’ wouldn’t have generated such a big backlash if she wasn’t the Finance Minister & Deputy PM of the country.

But for her and the Liberals to act as if they aren’t in a position to ease inflation demonstrates a disturbingly detached attitude.

Just contrast the way the Liberals talk about inflation with how they talk about climate change.

They act as if inflation – something that is heavily impacted by domestic policy choices – is out of their control, while claiming that climate change – something that Canada can do nothing about whatsoever – will be addressed by imposing a carbon tax on Canadians.

So which is it?

Is our government powerless to address problems?

Or is it all-powerful and able to alter the world climate?

For the Liberals to flip back and forth between those totally-divergent ideas while expecting Canadians to go along with the farce is the height of arrogance, the same arrogance shown by Freeland with her ‘advice’ on fighting inflation.

This arrogance contrasts with the humility that the Liberals should be feeling, given the significant damage they’ve done to our economy.

And in addition to this need for humility from the government what we also need in this country is honesty and credibility.

A government cannot be honest if they make a problem worse and then wash their hands of the consequences.

And, given their total absence of credibility, dishonesty covered up by arrogance seems to be all the Liberals have left.

After all, Pierre Poilievre was right two years ago about what was going to happen.

The Liberals were wrong.

The Bank of Canada was wrong.

So, the number one political imperative for the Liberals is to do everything they can to evade responsibility.

Reality has become their enemy, and that means truth is on the side of the many Canadians who are sick and tired of this out-of-touch Liberal government crushing our standard-of-living.