Ideology Above Country: Far-Left Liberal Government And Corrupted Media Have Canada On The Road To Ruin 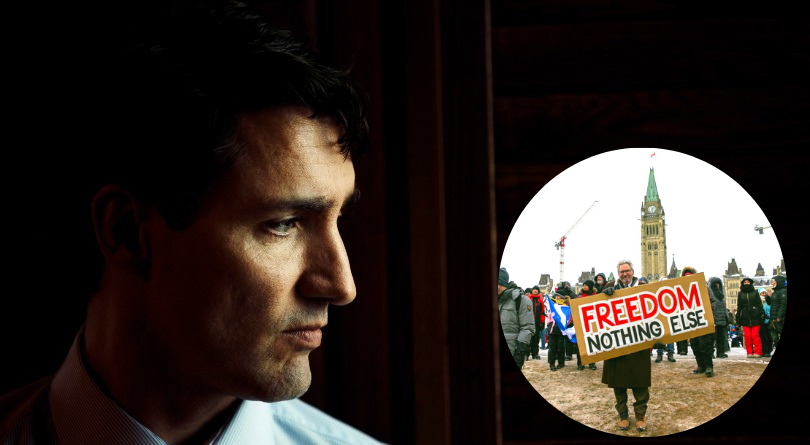 As we know, Canadians are being punished by a government pursuing destructive ‘green policies’ even in the face of a collapsing standard of living and impending economic disaster/social disorder.

We’ve seen the endgame of that in Sri Lanka.

We’re watching it happen in Germany.

We’re watching people fight back in the Netherlands.

And while Canada may be earlier on in the process – and is not nearly as poor as Sri Lanka – there is no attempt whatsoever to change course while there is still time.

Rather, the Liberals are doubling-down on policies that have Canada on the road to ruin.

With that in mind, it would certainly be surprising if the Liberal government tried to align themselves with the Sri Lanka protests, wouldn’t it?

It would be shockingly tone-deaf.

And it would be even worse if they talked about supporting peaceful protests in Sri Lanka, considering how they used false state media stories to create a pretext to abuse the Emergencies Act against peaceful protests here at home.

It would be the height of hypocrisy, ignorance, and lack of self-awareness.

So of course, that’s exactly what they did.

In a series of Tweets, Melanie Joly expressed support for the Sri Lanka protests, and expressed opposition to violence against peaceful protestors:

“The July 9th protests in Sri Lanka were a clear expression of the desire for a better Sri Lanka. Canada supports a peaceful, constitutional path forward that supports urgent action on  economic and political reform.”

“Violence against peaceful protestors and journalists is unacceptable and those responsible must be held accountable. The right to protest peacefully must be upheld.”

Is Joly unaware that the protests in Sri Lanka involved the storming of the Presidential Palace and led to the president literally fleeing the country?

Is Joly unaware that the imposition of ‘green’ policies played a huge role in what amounts to the complete collapse of Sri Lanka?

Is Joly unaware that the Liberals have praised and are implementing the same ideologically-motivated agenda that led to such disaster in Sri Lanka and which farmers in the Netherlands are desperately fighting against?

Is Joly unaware that the Liberals weaponized false media stories to assault the rights and freedoms of peaceful Canadian protestors?

If Joly is unaware of these things, it suggests a level of ignorance that is hard to fathom.

If she is aware and Tweeted this message out anyway, it suggests the Liberals feel a political need to align with the Sri Lanka protests, while doing nothing to change their underlying policies.

One thing we know is that the far-left has consumed the innards of many media institutions while maintaining the carcass. They then use the lingering historical credibility of those institutions to get away with pushing an agenda that is antithetical to the traditional role of the media.

Increasingly, it would appear the same thing has happened to the Liberal Party.

In 2015, Justin Trudeau ran on a mix of Liberal nostalgia, Keynesian economics, and civil libertarianism. Yes, it’s easy to forget now, but Trudeau even gave a speech about ‘Canadian Liberty’ in which he exploited libertarian concern at some actions of the Harper government.

It was a clever move, and since Trudeau had no long-term record in government to really scrutinize, it worked for him.

At the same time of course, Trudeau had also praised Communist China’s “basic dictatorship,” and the ‘woke movement’ was just getting underway.

Since taking power, Trudeau has not only abandoned any vestiges of libertarianism or ‘classical liberalism,’ but he has gone completely in the other direction.

He has imposed an increasingly authoritarian, anti-democratic, far-left agenda.

It’s an agenda that would be soundly rejected if it was pushed under the banner of the NDP, but having hollowed out the Liberal Party while maintaining the brand, Trudeau is able to get away with it.

As a result, both the Liberal Party of Canada and the establishment press are now imposters, hiding behind names that Canadians are familiar with, while imposing a radical agenda.

This is the key reason we keep hearing so much about the “far-right.”

Consider that the policies being proposed by Pierre Poilievre – whom the media has been relentlessly targeting as of late – largely represent what would be a return to the fiscal responsibility of the 1990s. Getting back to balanced budgets, smaller government, and ending the irresponsible debt-binge are all policies that were once considered ‘moderate’ and ‘mainstream.’

Those are also policies that the far-left hates, because the far-left agenda has no room for fiscal responsibility, and because they want to make the state all-powerful.

The Liberals and the establishment press are thus putting their radical, extreme, and dangerous ideology ahead of the good of the Canadian People.

They have set us on the path to potentially-irreconcilable division and economic ruin, and they won’t stop unless Canadians stand up against them and ensure their decisive defeat.