If Our Federal Leaders Had Courage, Opposing ‘Fourth-Wave’ Hysteria Would Be An Election Issue

A confident & mature democracy must be capable of having a real debate, rather than a false and artificially imposed ‘consensus’. 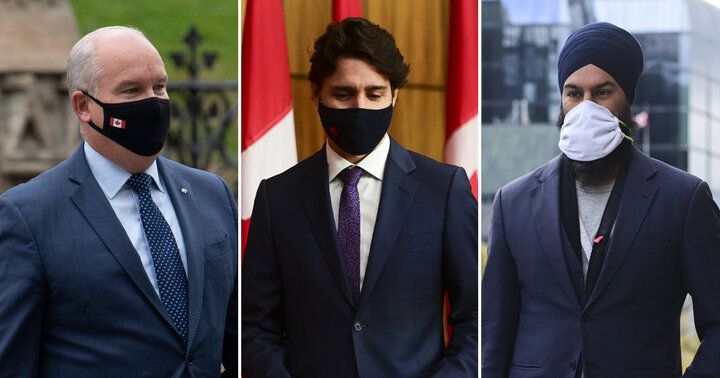 “Canadians are worried about a fourth wave of COVID-19.”

“The dangerous delta variant is here, and we have to be ready.”

Those were the words of Conservative leader Erin O’Toole in a recent video, but they easily could have been the words of Justin Trudeau or Jagmeet Singh.

At the federal level, among the leaders of the main parties, there is a clear consensus that Canadians must fear the fourth wave of COVID-19, putting off a return to normalcy.

At the same time, some provincial leaders – most notably Jason Kenney in Alberta – are showing courage by rejecting the fourth-wave fearmongering, and opening up the province in order to return things to normal.

This gap between provincial leadership and federal leadership is disturbing, especially with a possible election call only days away.

Canadians deserve a real debate and a real discussion about the ‘fourth-wave’ hysteria we’re currently seeing.

Instead, with even the Conservative leader buying into the fear narrative, Canadians are being subjected to a false and artificially imposed consensus.

The fact is that as vaccination rates rise, covid deaths are way down.

Even when people are infected, they are on average getting far less sick, with smaller percentages of infected individuals being hospitalized.

This was supposed to be the entire point of a vaccine rollout for our most vulnerable, and for those who wanted the ‘jab’.

We were repeatedly told that a combination of vaccinated individuals, those who had covid and recovered, and some people being unvaccinated would lead to a far lower death rate.

We were also told that it was unrealistic to expect covid to disappear, but that it would become endemic, while being much less deadly.

Both of those things have happened.

And, that should mean that things go back to normal – as Alberta is doing.

But lo and behold, the goalposts have moved again.

Notice how there are far fewer reports about covid deaths, and the focus is instead on cases?

But if fewer people are dying, why is there such a big concern about cases?

Because it is all about fear and control.

Every time it looks as if things are about to go back to normal, fear of a new ‘variant’ pops up, and the cycle of demanding lockdowns and restrictions begins again.

Rather than respect individual choice and responsibility, and rather than respect the Charter rights of Canadians, too many of our politicians instead latch on to whatever the latest fear narrative is, and spread that fear to the public.

Only a few leaders – like Jason Kenney and Scott Moe – have managed to stand up and reject the narrative, and as a result they are being heavily criticized by those who want to keep the fear going.

An election about nothing?

There may be real issues debated in the upcoming election. We certainly need to talk about the gargantuan deficit and surging national debt, along with the threat of inflation, plus the assault on free speech that Bills C-10 and C-36 represent.

But it remains to be seen if those issues will be debated in any depth.

And, for the main parties to all be perpetuating a fear-based message on the ‘fourth-wave,’ means Canadians will be deprived of a discussion on the most important issue of all: Our rights and freedoms & the power of the state.

We have witnessed an unprecedented intervention by the government into the lives of Canadians, with once ‘ironclad’ rights being revealed as privileges given out or revoked on the whim of politicians.

That represents a fundamental rearrangement of the relationship between the state and Canadians, a rearrangement that should concern every Canadian, and should be debated as thoroughly as possible.

People will continue to die

The 7-day rolling average in Covid deaths per day in Canada is about 10 people.

Each of those deaths are tragic for those who pass away and their loved-ones.

That said, a country of 37 million people cannot continue to impose restrictions based on such a small percentage of the population dying.

It may sound harsh, but it is the reality.

This idea that it is the job of the government to restrict our personal rights and freedoms to lower our risk of dying is incredibly dangerous, and has been pushed far beyond its limit.

As adults, and as free citizens, we are supposed to have the right to accept our own level of risk.

People can stay home if they choose.

People can continue to keep their distance from others.

Nothing is stopping people from making those choices for themselves.

But to continue demanding that those choices be imposed on everyone, and to keep putting off a return to normal is simply unacceptable.

The goalposts have shifted far too many times, and if our federal political leaders don’t have the guts or the courage to push back and admit that death is a risk we all take simply by being alive and being free, it falls to us common sense Canadians to say enough is enough, and that it’s time to return life back to normal.