Our ‘leaders’ seem glad to mingle in luxury without masks and social distancing, but they are unwilling to let go of the fear-based control they have over so many people. 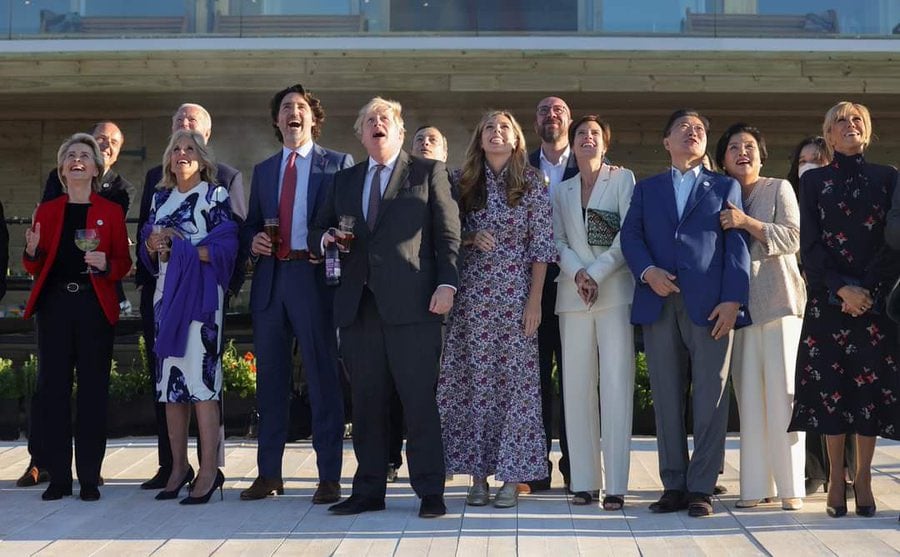 How long ago was that?

How many times have the goalposts shifted?

It seems like every time ‘normalcy’ is about to be restored, the timeline gets pushed off.

So it is once again, with a new fearmongering campaign ramping up:

“How are you starting your Monday morning? Coffee? Exercise? Getting the kids ready for school? (Outside of Ontario.)

Inside the lockdown capital of North America, Ontario's 'covid zero' interests have started the day by begging for the goalposts to shift to 90% vaccine uptake.”

Yes, now the new message is that 90% of Canadians need two vaccine doses:

Remember how we were originally told about the traditional conception of ‘herd immunity?’

Remember how it included people who had COVID-19, those who have been vaccinated, and a percentage of the population (roughly 30% or so), who were unvaccinated?

Of course, the WHO changed the definition, claiming “'herd immunity’, also known as ‘population immunity’, is a concept used for vaccination, in which a population can be protected from a certain virus if a threshold of vaccination is reached.”

Throughout the past year and a half, many of those in positions of power – including politicians and ‘experts,’ have seemed almost attached to the crisis, not wanting normalcy to resume.

That may seem cynical, but we very well know how much the power and influence of many people has expanded during this pandemic, with governments across the political spectrum, such as the Trudeau and Ford governments, massively infringing on the basic rights of Canadians.

As a matter of fact, they have gone so far that our ‘rights’ have been revealed as nothing but privileges, doled out at the whim of politicians who exempt themselves from those same rules.

And if you were looking for an example of that “do as I say, not as I do” attitude, look no further than the G7.

Consider that as the global elites seek to push fake meat and bugs on the population as ‘new food staples,’ our illustrious leaders ate steak and lobster:

“Leaders at the G7 summit, including Gates, will be discussing how to get more of the globe to eat "sustainable" bugs & soy, while they eat steak & lobster on the beach.”

Also, they did not seem too worried about ‘social distancing’:

“While ‘social distancing’ is clearly out the window for the G7 attendees, they conveniently forgot to tell us that the “pandemic” is obviously over then.   If it’s over for them, then it’s over for us.”

At this point they are practically bragging about what they can get away with.

And why wouldn’t they?

In countries like Canada, many people have simply put up with the arrogance and hypocrisy of our elected officials, and even supported it.

We have watched as ‘exemptions’ were given out based on what politicians thought would be popular, a complete abandonment of the idea of any such thing as ironclad rights. Such a deviation from our previous understanding of Canada should have been a bigger deal to people, yet many Canadians tacitly supported it, and often cheered when authorities punished those who sought to push back – even when people were trying to keep their livelihoods afloat.

What is happening is that a deeply unhealthy relationship has formed, a dependence based-relationship between those who gain power from spreading fear, and those who have been made so afraid that they are seeking constant government protection.

As we know, people do not like to give up power, so the politicians and public officials have an interest in maintaining a state of fear.

And for those who are deep into that state of fear, they feel that their only protection and safety lies in continuing restrictions on our freedom.

What makes this moment so dangerous is that those in power have learned the true power of fear.

As a result, even when COVID restrictions are fully removed, the fear campaign will be utilized again, for climate change.

They will again push the rhetoric of emergency, ‘saving lives,’ ‘the science,’ and more. And the ‘fix’ for all those problems will be more government power, and more restrictions on our freedom.

After all, the World Economic Forum has already telegraphed this. Here’s what they published on their website in 2020:

“If there is a silver lining to something as catastrophic as COVID-19, it’s the environmental boost and the slowdown in greenhouse gas emissions that we experienced in the early part of the year.

As industrial output plummeted, and as cars disappeared from roads, and planes were grounded, people worldwide noticed a positive effect on their surroundings. The air was cleaner, there was less pollution, and nature began to restore the balance.

Surely after experiencing this glimpse into a 1.5°C future we won’t go back to our carbon-intensive lifestyles?

But the fear is that we could. Even before the pandemic struck, there were concerns about achieving the UN target to limit global warming to 1.5°C. Now COVID-19 may undermine concrete action as well as good intentions.”

Unless people like us push back, we may see continued lockdowns under an ever-shifting set of ‘justifications.’

Our hypocritical leaders have been emboldened, and they think they can get away with anything.