The Failed State(s) Of Canada? 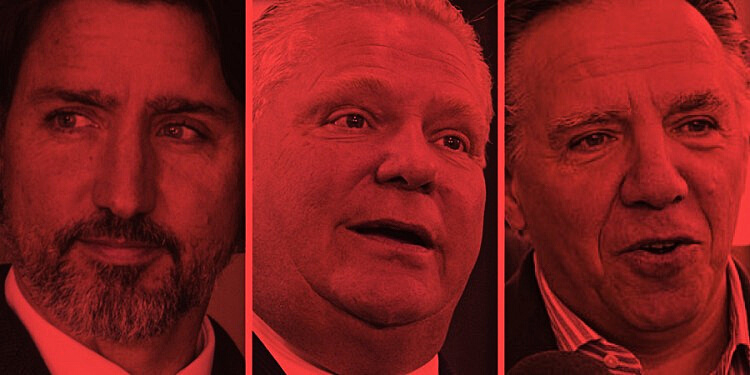 A national leader stoking divisions in the most cynical way, asking if certain people in the country should be ‘tolerated’ and demonizing a group for his own political advantage.

Repeated closures of businesses on the whims of politicians.

Rules that benefit a select few while punishing everyone else, like allowing professional athletes to keep training while closing gyms to the general public.

Whiplash-inducing reversals by government officials that seem almost designed to cause further mental health anguish in the population.

Incompetent management of the healthcare system, which is then used as the pretext to take away rights and freedoms.

An ‘opposition’ that seems to exist only to present the illusion of choice.

State-run media that attacks those who ‘dare’ question the official narrative.

More and more people talking about how they are going to flee somewhere that is still free.

A populace divided between those who bow down before government power due to being consumed with fear, and those who can see that our freedoms are being stripped away.

An economy that is increasingly based on governments printing money and giving that money out to people who aren’t working, causing surging inflation and a severe drop in our standard of living.

Absolutely zero responsibility taken by those in power, with politicians blaming everyone but themselves for their incompetence, and even seeking further power to silence any who dissent.

Does it sound like one of those countries we would have watched on the news and said “wow, it must suck to live there,” and then gone on with our day content in the knowledge that we weren’t in a place like that?

Or, is it the unfortunate reality that it sounds like Canada?

To call Canada a free country at this point would be to stretch the definition of freedom to the very limit.

You would have to lower your standards for what constitutes freedom to such a level that the word becomes almost meaningless.

Some will say that Canada is still free because we can vote and speak out against the government (though that is being increasingly restricted).

But is that all freedom is?

The ability to speak out?

How about the right to leave your house when you choose?

How about the right to gather with whomever you want?

How about the right to run a business?

How about the right to earn a living?

How about the right to make your own medical decisions?

How about your right – as an adult – to be responsible for your own life?

How about limits on the power of the state – limits that history shows are necessary to prevent abuses of power?

That is also what freedom is about, yet in Canada today, those freedoms are denied to a large portion of our population.

The fact is, Canada at this moment more closely resembles a failed state than it does a functioning, free nation.

Consider that politicians in some of our largest provinces are placing repeated draconian restrictions on rights and freedoms, while claiming that they are doing so to prevent the socialized healthcare system from collapsing.

That system is state-run, meaning the politicians taking away your rights are responsible for the system they claim is so broken and fragile.

The more they fail, the more of your freedoms they take away.

They also lie repeatedly, dangling a return to freedom and return to normal in front of the populace if people do what they say, and then once many have done so, make more and more demands.

The demands keep on coming, the return to normal never does.

After all the incompetence, the failure, the gaslighting, the dishonesty, and quite frankly pathetic lack of any leadership skills, creativity, or innovation whatsoever, have any of the people in charge resigned?

Have they admitted that they don’t have what it takes?

Have they admitted that instead of repeatedly locking people down they should be removing restrictions and letting free individuals take responsibility for themselves?

They just keep doubling-down on the same failed approach, keep locking people down, keep imposing restrictions, and keep damaging the country even further.

Canada will continue to go down this dark path and resemble a failed state until enough of us wake up and realize that there must be a total housecleaning among our political parties and a massive reduction in the size and power of the government apparatus. And the best way to get that process underway is for people to stop listening to those in power and make their own decisions. They can’t control all of us if we have the courage to think for ourselves.