Conservative Debacles Are Making It Too Easy For Trudeau 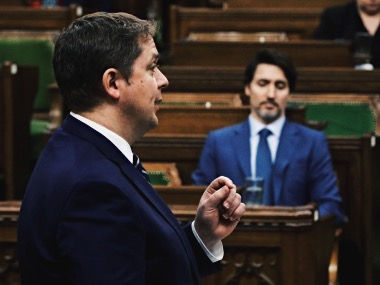 In theory, Justin Trudeau should be a very unpopular politician and the Liberals should be trailing in the polls.

The initial response to the Chinese Communist Party Coronavirus was horribly botched, with the Liberals prattling on about ‘stigma’ and ‘racism,’ while rejecting the border controls and screening measures that worked so well in places like Taiwan, Australia, and New Zealand.

Then, with the Canadian People and much of the world turning decisively against China, the Trudeau government made the inexplicable decision to partner with China’s military on vaccine tests here in Canada, an appalling and deeply disturbing move.

Additionally, the Conservative Party voted for the Canada Emergency Response Benefit, a program that is likely to be one of the most popular government actions of all time. By voting for the CERB, the Conservatives were well positioned to be seen as being on ‘Team Canada’ when it came to providing Canadians with the financial support so many need, while focusing on other areas where the Liberal government had failed and could be held accountable.

But instead, it’s all gone quite differently.

The Conservatives have fallen far behind in the polls, with one survey giving the Liberals a nearly 20-point lead.

Trudeau’s approval ratings have surged, while interim-Conservative leader Andrew Scheer has moribund numbers and the party is in the middle of a leadership race.

Additionally, the party has been shockingly tone-deaf, alienating both the broader Canadian public and their own core supporters.

For example, the Conservatives have been going on and on about ‘CERB fraud,’ a position which was easily spun by the Liberals and backfired on the Conservatives, with many slamming them on social media. The Conservatives created a perception (whether fair or not), that they were becoming critics of the CERB, thus allowing the Liberals to more fully take credit for the popular program.

Meanwhile, we’ve since learned that the Conservative Party joined the NDP, Greens, and Liberals in taking the federal wage subsidy, in what seems to be quite the contradiction to the party’s supposed ‘free market’ principles. As a result, the party will be seen by many Canadians as deeply hypocritical, campaigning against supposed ‘fraud’ on the one hand while taking government money behind the scenes despite raising millions in donations every year.

As if that wasn’t enough, the party was found to have improperly disqualified leadership candidate Jim Karahalios. Yet just a day after losing in court, they disqualified him again.

The move has angered and demoralized many Conservative supporters, who – whether or not they supported Karahalios – are disturbed to see the Conservatives acting like the ‘cancel culture’ leftists by stifling diverse voices and imposing top-down, centralized control rather than trusting their own membership to vote freely.

And on the issue of the Liberal government partnering with China’s military on a vaccine, the Conservatives have failed to draw more attention to it, with Scheer’s press conferences being taken up with other issues that simply aren’t resonating.

As a result, the Conservatives are getting crushed in the polls, and seem more vulnerable than ever, while Trudeau is riding high.

As we consider all of this, we can realize why organizations like the National Citizens Coalition are so important. Often, we can’t trust political parties to live up to their values and their promises, and only strong non-governmental institutions of free Canadians can fight to keep the politicians in check.

With Canada facing unprecedented challenges to our health system and severe economic problems, Canadians need the NCC to fight for a vision of Canada that is strong, free, and truly representative of the hopes and dreams of the Canadian People.

And with the opposition constantly struggling to hold Trudeau accountable for his failures, and with the biased media acting like an arm of the government, the NCC and other common-sense Canadians are stepping up to fight for our country in these dark times.