Justin Trudeau Rewarded Omar Khadr, While Trying To Destroy Admiral Mark Norman. It Doesn’t Get More Sick & Twisted Than That

Trudeau and his disgraceful enablers are trying to corrupt Canada beyond all recognition. 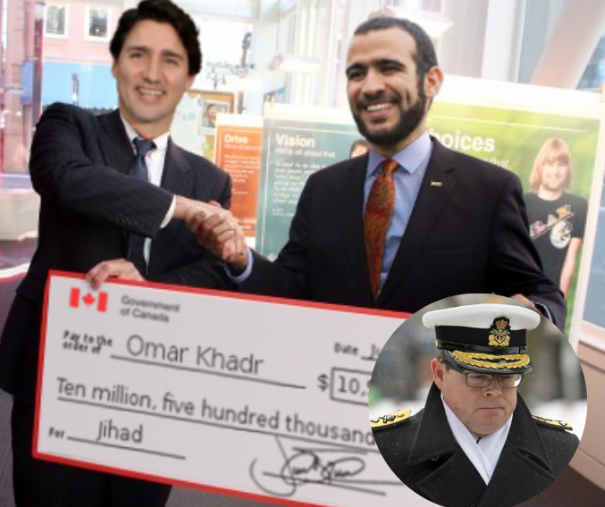 There are many examples of Justin Trudeau and the Liberal government trying to remake Canada in their own messed-up image.

But there is no clearer example of how sick and twisted things have gotten than the contrast in how Omar Khadr – a convicted terrorist – and Vice-Admiral Mark Norman – a defender of our nation – were treated.

Even writing that sentence seems crazy, yet that’s the reality we’re facing.

Remember, Justin Trudeau went out of his way to give Omar Khadr the disgusting $10.5 million payment as quickly as possible, so the wife of Christopher Speer was not able to block the payment in court.

Trudeau also had to personally approve the money being given to Khadr, and as a result, Trudeau bears personal responsibility for it.

So, facing the choice between confronting an accused terrorist (who was fighting for an enemy of the Canadian people) in court, and bending over to give him a gigantic amount of money, Trudeau chose the latter.

And yet, look at how Justin Trudeau and the Liberal government treated Mark Norman.

They unleashed the entire power of the state against him, attempting to destroy his reputation, destroy his career, and even take away his freedom.

Trudeau and his bunch of corrupt backroom hacks sought to take down someone who had served Canada at the highest level.

Then, when the Liberals realised that going forward with a trial would hurt them politically, the case magically gets dropped.

Norman’s life was torn apart, he had to live with immense stress and fear, and he was dragged through the mud – all because Justin Trudeau and the Liberals wanted to punish him.

While Norman was living in fear, Omar Khadr was living it up, even purchasing a mall with the immense payout Justin Trudeau gave him. Khadr also went on a taxpayer-funded talk show in Quebec, being treated like a hero by the host and the audience.

And while Khadr was spending the millions given to him by Trudeau, Norman was being bankrupted by legal fees.

There’s also one area of contrast that hasn’t received that much attention.

We noted earlier how Justin Trudeau went out of his way to give money to Khadr. We also need to consider that the Liberals went out of their way to deny information that could have helped Vice-Admiral Norman’s defence. Norman’s team had asked for documents that could have exonerated him, yet were denied repeatedly by the Trudeau government – in one case ‘receiving’ a 60 page memo of Trudeau’s communications with Privy Council Clerk Michael Wernick that was entirely redacted.

Trudeau was unwilling to fight Khadr in court, but was more than willing to use the full power of the state to persecute Norman.

It’s tough to really put into words how screwed up all of this is.

Beyond being screwed up, it is also incredibly dangerous, because it shows an effort on the part of the government to subvert our nation from the inside by corrupting the values upon which Canada is based.

The Trudeau Liberals are attempting to overturn the very idea of justice and what it means to be good.

That will send a very disturbing message throughout the nation, discouraging many from following Norman’s path of dedicated service, and emboldening those who would commit evil and attempt to tear our country apart.

If we want to avoid those consequences, then Trudeau’s sick and twisted agenda must be crushed and defeated. He cannot be allowed to hold onto power. Nothing less than the future of Canada’s soul is at stake in October.