Don Cherry’s Firing Shows Patriotism Is Under Siege In Canada

Increasingly, anyone who stands up for Canadian patriotism and the interests of our country gets brutally attacked, while those who disparage Canada and accuse us of ‘genocide’ get rewarded. 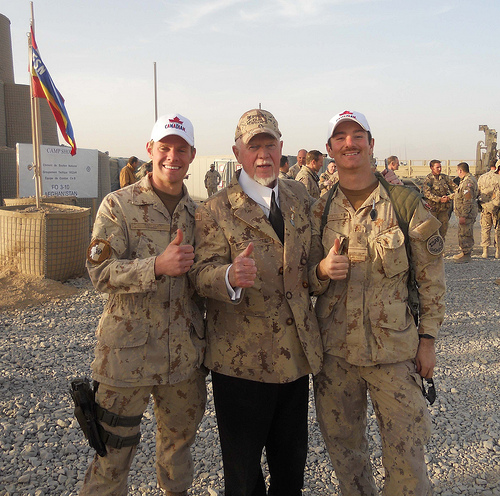 Let’s consider some things that have recently happened in our country:

A party that explicitly wants to break up the country won nearly half the seats in our second largest province -- and has openly thumbed its nose at the same Albertan oil that bankrolls their "distinct" society.

A TV host on ‘The Social’ made bigoted remarks about hockey fans being “white boys” who “weren’t very nice.”

The Canadian military was used by Communist China as a propaganda tool, when the Canadian government sent them to participate in the military games in Beijing.

A Canadian icon who has done more than almost anyone to encourage support for our troops was fired for the ‘crime’ of suggesting that Canadians, including newcomers, should wear poppies to honour Canada’s heroes.

Out of all those things, only one resulted in elitist outrage and actual punishment.

Guess which one it was…

Of course, we know the answer.

Meanwhile, the Bloc is getting praised by the media, Trudeau remains in power, Jess Allen will almost certainly maintain her spot on ‘The Social’, and there were crickets about the disgraceful use of our military as a Chinese propaganda tool.

The hypocrisy and contrast is stunning.

Note also how the original point Cherry made was quite clearly based on actual evidence.

As Joe Warmington noted on Twitter, there seemed to be a big absence of poppies in downtown Toronto:

So, Don Cherry was reacting to something real that he had seen with his own eyes:

An absence of poppies in Canada’s largest city.

And for Cherry, who has been fighting for years to ensure that Canada has more respect for our Veterans and those who serve our nation, that understandably made him angry.

Yet, after expressing his feelings (in a way the vast silent majority of Canadians agree with), Cherry was fired by the gutless cowards at Sportsnet.

The deeper reality here is that patriotism is under siege. In fact, the real reason Cherry was punished is because he openly expresses his patriotism for Canada.

The ‘post-national’ elites are trying to crush the idea of Canadian patriotism & nationalism, and replace it with an endless stream of shame and condemnation of our own country.

Consider the fact that Canada has been accused of an ‘ongoing genocide’ by our own Prime Minister, and that we have seen an endless stream of apologies for Canada’s apparent ‘crimes.’

We are expected to feel bad about being Canadians, feel bad about our country, insult the values Canada is based upon, destroy our history, and ignore the great achievements Canada has made fighting for freedom.

Our own energy industry in Western Canada is being crushed by the Canadian federal government and radical politicians, even as imports of oil from foreign countries like Saudi Arabia continue unabated.

Unsurprisingly, that agenda of wiping out Canadian patriotism benefits those who want to keep Canada weak and unable to stand up for ourselves.

And that attitude of weakness is seen in how Ron MacLean and Sportsnet threw Cherry under the bus so quickly, surrendering to a small but media-driven outrage mob.

All of these things are connected, and things are looking very disturbing for the future of our country.