The Dangers Of The Supreme Court Ruling On The Carbon Tax 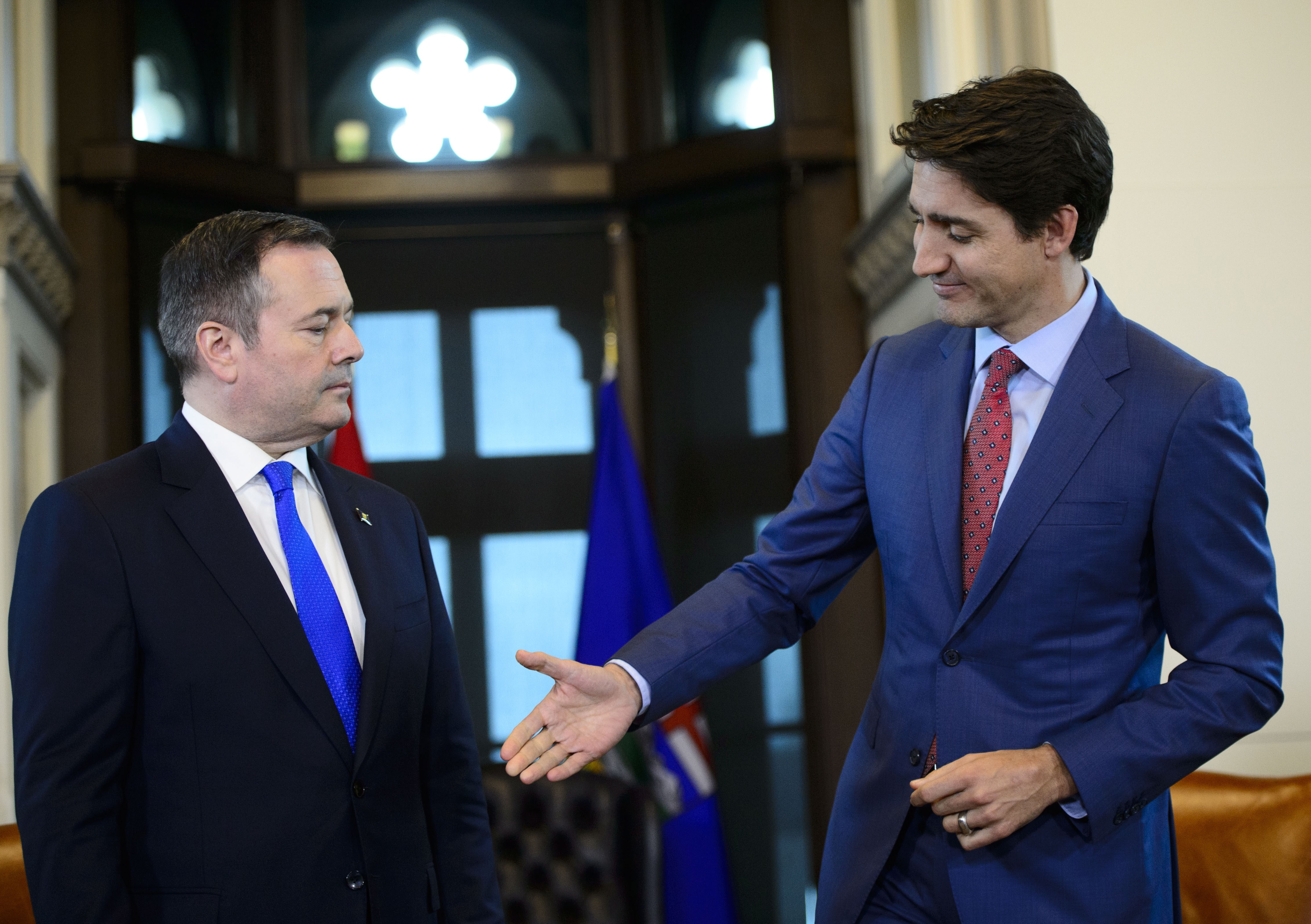 In the past year, we have seen a centralization of power that once would have seemed unthinkable.

At all levels, power travelled away from the individual and towards politicians and bureaucrats.

That centralization of power was ‘justified’ due to the Wuhan Virus crisis, but it increasingly became clear that many people in positions of power were using the crisis to amass power in a way they had long wanted to get away with.

A similar pattern of thinking had long been in place in Ottawa, with the imposition of the carbon tax on unwilling provinces.

The Trudeau government used the perception of a crisis to expand their authority, moving power (and money), from the pockets of Canadians and into central government coffers.

The only provinces that avoided it were the ones that imposed a tax themselves, which still takes money away from individuals and local communities, and still pushes jobs and investment away.

Many provinces fought back against this, pointing out that it quite clearly infringes on provincial jurisdiction.

Inevitably, the fight made its way to the Supreme Court, where – in a ruling that is quite disturbing – they all but admitted that the carbon taxes does impose on provincial jurisdiction, but is ‘justified’ because of their belief that the issue of climate change is so important.

As we often see with decisions made by the governing elites, the rules can simply change whenever they want, based on how they feel, rather than on the actual substance of those rules.

In a powerful dissent, Justice Russell Brown warned of the damage the ruling could do. Here are some key excerpts:

This is ‘irreconcilable with the division of powers’ writes Justice Brown:

“Even were the reduction of GHG emissions a single and indivisible area of jurisdiction, its impact on provincial jurisdiction would be of a scale that is irreconcilable with the division of powers. Because the power to legislate to reduce GHG emissions effectively authorizes an array of regulations and extends to the regulation of any activity that requires carbon-based fuel, it has the potential to undo Canada’s division of powers. GHG emissions simply cannot be treated as a single regulatory matter. While the Act does not forbid any activity, the charges it imposes will affect the cost of fuel and dictate the viability of emissions-intensive trade-exposed activities. These charges thereby stand to have a profound effect on provincial jurisdiction and the division of powers. The division of powers analysis allows no recourse to balancing or proportionality considerations. The Constitution Act, 1867, sets out spheres of exclusive jurisdiction so that within their sphere of jurisdiction, the provincial legislatures are sovereign, which sovereignty connotes provincial power to act or not act as they see fit, not as long as they do so in a manner that finds approval at the federal Cabinet table.”

“The framework adopted results in a new, distinctly hierarchical and supervisory model of Canadian federalism that subjects provincial legislative authority to Parliament’s overriding authority to establish national standards of how such authority may be exercised and replaces the constitutionally mandated division of powers with a judicially struck balance of power, which must account for other interests. No province, and not even Parliament itself, ever agreed to ⸺ or even contemplated ⸺ either of these features. This is a model of federalism that rejects the Constitution and re-writes the rules of Confederation. Its implications go far beyond the Act, opening the door to federal intrusion ⸺ by way of the imposition of national standards ⸺ into all areas of provincial jurisdiction, including intra-provincial trade and commerce, health, and the management of natural resources. It is bound to lead to serious tensions in the federation. And all for no good reason, since Parliament could have achieved its goals in constitutionally valid ways.”

You can see the danger here.

The Supreme Court, by siding with the Trudeau government, has given the federal government a pathway to ‘justify’ further and further centralization of power.

“We are obviously disappointed with that decision. The Supreme Court ignored the Alberta Court of Appeal’s warning and discovered a new federal power that erodes provincial jurisdiction and undermines our constitutional system.” 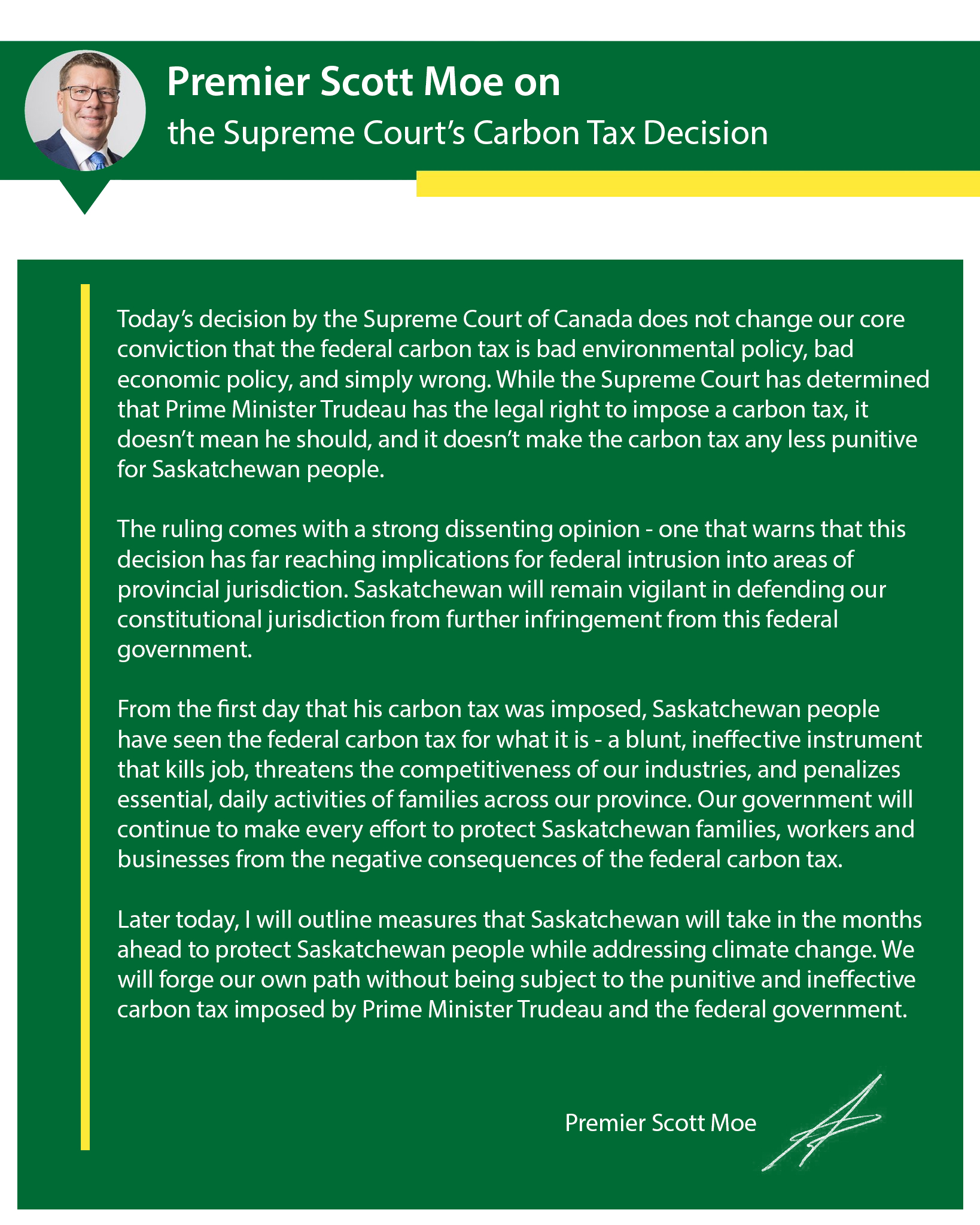 While the Trudeau government and some media cheerleaders are celebrating, this is a loss for Canada.

The carbon tax will continue to be imposed, and rather than actually reduce emissions in the world, it will push more jobs and investment outside of Canada.

Money and jobs will leave Canada’s energy sector, further dividing the nation, while countries like Saudi Arabia and Russia will benefit from their energy sectors gaining a further competitive advantage compared to Canada.

Ironically, this will likely drive overall emissions up, since economic activity will expand in countries with weaker environmental and labour standards than Canada, while Canada will lose out.

In both the short-term and the long-term, this decision sets Canada up for a poorer and more divided future, while enabling even further centralization of power in a country where centralization has already gone way too far.