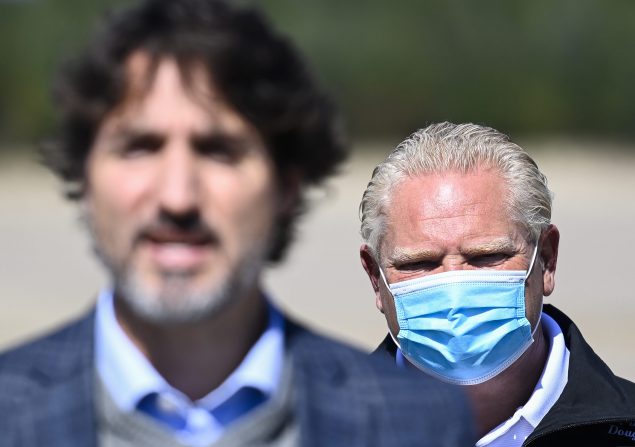 And leaders are no exception to that.

Good leaders may make many mistakes over the years, but never the same one.

This process of learning and adapting is what we should be able to expect from those in charge, as leadership without growth isn’t leadership at all.

And this brings us to the latest lockdowns and restrictions being imposed across the country, but particularly in Ontario by the Ford government.

At the beginning of the pandemic, the approach of locking down – when the deadliness of the virus was unknown – was understandable.

It was a new situation and leaders were acting with little information.

People gave leaders wide latitude initially, recognizing how unprecedented this all was.

But then, we started to see the mistakes piling up.

They continue to this day.

And in fact, they are even getting worse in some instances.

In Ontario, Ford is pushing (or being pushed) towards the strictest measures so far, with stay-at-home orders, and the government is even musing about restrictions on the ability to travel within Ontario from region to region – an obvious assault on Charter Rights.

Every time the government says cases have gone up, Ford appears to look for the same approach of locking everything down again.

Small businesses get to open, only to be slammed shut.

Ford complains about people walking around the malls, but he left the malls open.

At no point does it seem to have occurred to Ford that trying the same thing over and over again isn’t working, considering that Toronto has been in the strictest lockdown in North America for months, yet cases are still rising there.

The fact is, Ford seems to have shown no ability to reassess his approach and adapt to changing circumstances.

Of course, this is a multi-partisan problem.

The Trudeau government has been incompetent and contradictory from the start, and that has been due to making the same mistake over and over again: Putting virtue-signalling ahead of reality.

Whereas Ford looks for lockdowns as the solution to everything, Trudeau looks to political correctness, and the consequences for Canada have been stark.

At the beginning, we were told that border controls and flight restrictions were ‘racist’ and ‘bigoted,’ so of course the virus entered the country.

Then, the government gave a bunch of our PPE to China.

Then, they tried partnering with China on a vaccine, which predictably ended badly, wasting months of our time and letting other countries jump ahead.

Then, the Liberals panicked, needed to look like they were doing something, and ‘bought the most vaccine doses per capita,’ a claim that seems dubious at best, and at worst appears to be massive spending to get to the back of the line.

Further, in their desperation and desire to keep up appearances, they sought AstraZeneca doses from the US at a time when the US hasn’t even approved it for their own population, and pushed the timetable between doses out to 4 months, when many experts advise otherwise.

The problem is both these approaches – the reflexive lockdowns and the obsession with political correctness – end in the same place:

A harsh clash with reality.

But that can never be admitted, and those who have control clearly don’t want to give it up.

So now we are hearing about ‘vaccine passports.’

Keep in mind, that’s not about passports to travel outside Canada, it’s the idea that you would have to ‘show your papers’ to travel and shop within Canada, even potentially within your own neighbourhood.

At every moment when politicians have failed, their move has been to infringe more on our rights, and grab even more power.

In effect, they reward themselves for failing.

And sadly, many Canadians are cheering them on.

There are people calling for full military-enforced lockdowns, celebrating punishments of ‘violators,’ and demanding ever-stricter measures.

So, this all comes back to us, the Canadian people.

We get the politicians and leaders we deserve, and if the past year has shown a serious lack of leadership at all levels in our country, we must ask why we have allowed this to happen, and what it says about our country that it continues to happen.