A mix of radicalism, naivety, and submission to ‘the leader’ that will further damage our nation 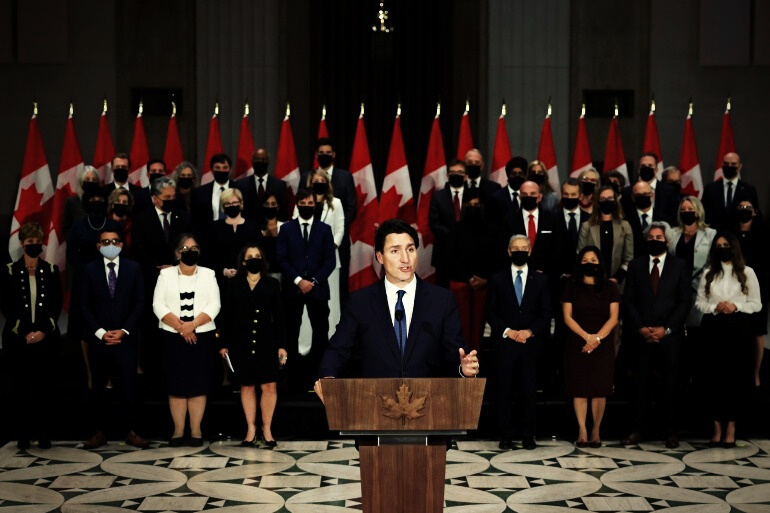 For pessimists, the main adage in life is “it can always get worse.”

Often, pessimism is not far off from realism.

And unfortunately, in Canada’s case, pessimism is indeed the most realistic way to assess Justin Trudeau’s cabinet shuffle.

As we know, the Liberal Party has long been transforming itself into a personality cult centred around Justin Trudeau.

Those who saw through his façade – as Jody Wilson-Raybould & Jane Philpott did – have been pushed aside, leaving those who feel they owe their political careers and continued influence only to Justin Trudeau, rather than their own sense of values & principles.

To get a sense of how determined Trudeau is to ensure that only sycophants occupy positions of power, consider that Jim Carr and Marc Garneau have been removed from the federal cabinet.

Say whatever you want about either of them – and they are of course both statists who want to expand government power – but they were about the closest to ‘the adults’ in the room that the Liberal government possessed.

Note that both Carr and Garneau possess experience, credibility in sections of the business community, and their own – albeit limited – personal power bases.

If anyone had the power to push back even lightly against Trudeau internally, it would be people like Carr & Garneau.

Now, they are gone.

Thus, an already sycophantic federal cabinet has become even more so.

And of course, sycophants tend to be incompetent much of the time, given that their number one goal is to stay in the good graces of their superiors, rather than stand up for Canadians.

Guilbeault empowered to do serious damage

Steven Guilbeault is a ‘true believer.’ Down to the very core, he believes he is part of a grand environmental mission to ‘save the world’ and that expanded government power is the tool he will wield to achieve that mission.

This is deeply dangerous, because – as history has shown – we have far more to fear from politicians who truly believe they are acting ‘for the good of everyone,’ than we do from greedy or self-serving politicians.

Sure, self-serving politicians will be a little corrupt, but the intensely ideological, radical, true believers will go to nearly any lengths to run roughshod over all opposition, convinced the entire time that they are ‘doing the right thing.’

That’s why it is no coincidence that Steven Guilbeault was so dangerous as heritage minister, pushing for legislation that would severely restrict freedom of expression and move Canada towards one of the most restrictive internet landscapes of any ‘free country,’ so restrictive as to move Canada closer towards the state-controlled internet of a Communist nation like China.

Guilbeault’s tactics in attempting to impose such legislation were also evidence of his radicalism. He would cleverly appear to backtrack when opposition to the extreme proposals rose, yet his ‘reversals’ and ‘changes’ were used to get through the immediate media cycle, before again putting forth the same legislation when attention had turned elsewhere.

He wouldn’t let anything stand in the way of achieving his agenda, even if it meant repeatedly deceiving the public.

Ironically, Guilbeault’s radicalism also feeds into his incompetence. He was so clearly angered that any would ‘dare’ oppose him that he often let slip the true intentions of the government. But, that didn’t stop Trudeau from keeping him around.

And now, he has been given an even more powerful job:

The ministry also of course has been previously renamed under the Liberal government, now including ‘climate change’ in the title.

Trudeau didn’t put a radical like Guilbeault into the role by accident.

‘Climate change’ is the ‘crisis’ statist politicians will use to perpetuate the level of public fear that allows those in power to continue infringing on our freedoms, lowering our standard of living, and ‘putting our rights on hold.’

With statists like Guilbeault, Trudeau, and the rest of the sycophants, Canada is set to continue on a path where our wealth will be drained away, inflation will rob of us of our hard-earned purchasing power, other countries will get rich while we crush our own energy sector, and deepening regional divides widen even further.

In short, Justin Trudeau’s latest cabinet shuffle makes everything bad about his government even worse, with the few potential voices of relative reason now gone.

This means that freedom-loving Canadians are going to have to fight harder than ever to defeat the impending expansion of the assault on our rights and liberties and will have to put it all on the line to maintain our standard of living in the face of those who will rob us of everything we have.