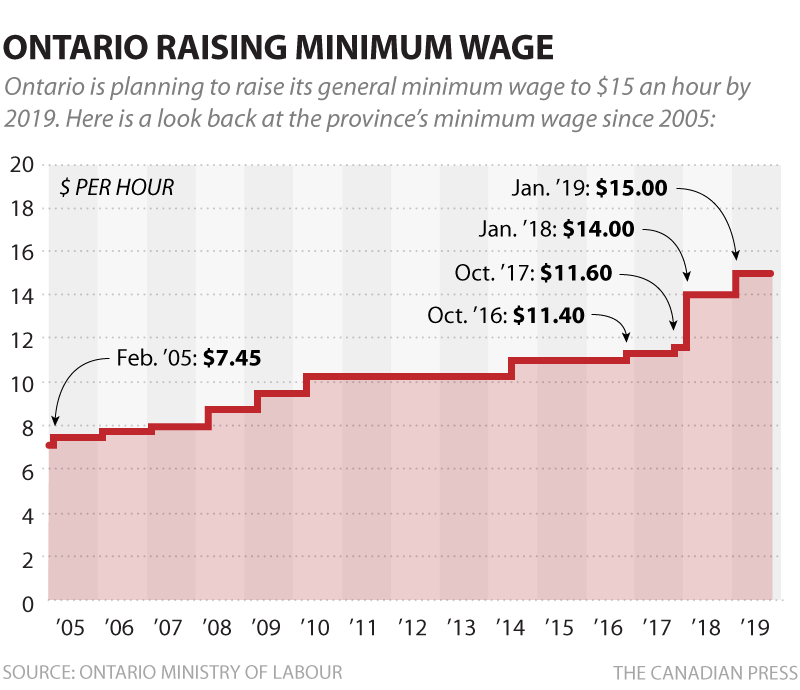 The Ontario Government recently announced that it was preparing legislation to increase the minimum wage in Ontario from its current level of $11.40 to $15.00. The increase is planned to take effect in two stages – to $14.00 per hour on January 1, 2018 and then to $15.00 on January 1, 2019. Most of the debate so far has centered on the potential impact on employment levels for low wage workers and on the impact on jobs in the sectors that employ a large number of minimum wage employees.

What hasn't attracted as much attention is the potential impact on other low income groups such as those on social assistance and seniors on fixed income. The significant increase in the minimum wage and the resultant potential for increased costs to businesses that employ large numbers of low wage employees may force many of these businesses to increase prices which will have a direct impact on other low income groups who will not benefit from an increase in the minimum wage.

If this is the case, the effect can be compared to a regressive tax increase. Our tax system is based on progressivity (the more money one makes the higher the rate of tax). A regressive tax is one that affects all income levels equally (everyone pays the same rate). So, for example, if the cost of a pizza is raised $0.50, all pizza lovers pay the same amount regardless of their income. A senior on a fixed income will be affected far more by the increase of $0.50 than someone earning the average Ontario annual income of $50,000.

And it's not just the price of pizza that may be affected. The industries that employ the largest number of minimum wage workers are agriculture; accommodation and food service and wholesale and retail trade. All of these industries touch food in one way or another; whether it's the counter staff at Tim Horton's or the checkout person at Loblaws or the farm worker that picks the tomatoes. Food prices affect everyone.

Clearly, losing money is not a long term strategy, so prices will have to rise.

So why should what appears to be a significant benefit for the low income workers in our province have such a negative effect on all others. To take a typical restaurant example, wages and other payroll costs are typically 30 per cent of the price of the food that you buy. If half of the payroll is for minimum wages employees, then 15 per cent of the price of the food you buy is paid to employees making the minimum wage. If the minimum wage increases 31.5 per cent ($11.40 to $15.00), then the restaurant's total cost will increase approximately five per cent.

Most restaurants make approximately five per cent profit, which is typically the owner's compensation, so without a price increase, the owner would make nothing. If the proportion of minimum wage employees is greater than 50 per cent of the payroll, then the restaurant will lose money. Clearly, losing money is not a long term strategy, so prices will have to rise.

James Rilett, the Vice President, Ontario of Restaurants Canada, the National association representing restaurants and the foodservice industry said the following in an email exchange:

"In a survey to foodservice operators, they have told us they will respond by reducing employee hours, cutting staff and raising prices. Given the price sensitivity of customers, operators will try to keep menu prices from soaring too high. In some cases though, prices may increase by as much as 8%."

While the Ontario Government's plan to substantially increase the minimum wage is laudable in its attempt to address poverty and low income, it may backfire. In addition to job losses in the restaurant and foodservice industry, it will have perhaps unintended consequences through rising inflation that will be borne by all Ontarians, but will be felt most acutely by those already struggling on fixed incomes.

David Howard is a lawyer in Toronto who comments on political and social justice issues. The original version of this article ran in the Huffington Post Canada on July 19, 2017.

Submissions to Citizens' to Citizens are welcome, pending editorial approval. Email the editor at [email protected]