A Message from the Chairman:

Bill Morneau – The Next “Pink Floyd?” 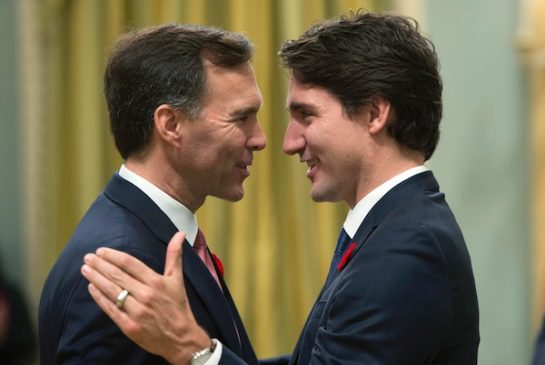 Ontario taxpayers may recall the odious results of “tax fairness”. In 1993, Bob Rae’s NDP government struck a “Fair Tax Commission” to help justify its frontal assault on Ontario business owners. The commission was a kangaroo court which bolstered the high taxing plans of treasurer Floyd Laughren. The Ontario economy sank. The battle lines were drawn and Laughren – dubbed “Pink Floyd” by his opponents – spent his entire time in office as public enemy #1 for the business community.

After only 20 months as an Ottawa rookie, the same ignominy looms before Bill Morneau. To coddle NDP voters stolen in the 2015 election, he has racked up massive deficit spending, shattering Liberal election promises. The new dividend tax increase is even more brazen class warfare. It attacks business owners – especially those in small business – with a surtax in the guise of “fairness” with others who are salaried employees. It abandons any recognition that an entrepreneur takes considerable risk in starting a business. This is no easy task in Canada, where governments at 3 levels snipe at these “wealthy” individuals who dare to try to make a profit. Besides fending off bureaucrats, business owners have the responsibility of meeting payrolls, negotiating loans with banks and a myriad of other jobs that salaried employees are often unaware of. But today’s deep-state Ottawa will never acknowledge that there must be incentive and reward to risk capital.

If Bill Morneau looks unconvincing trying to sell this tax increase, it is likely because he knows it is wrong. He did not build his firm Morneau Shepell by ignoring the people who took risks to hire employees and cut the cheques for his consulting services. But in his new political world, he spends time not with entrepreneurs, but with mandarins who have openly cheered the second coming of Trudeau Big Government. Living in a whirl of limousines, government jets and hobnobbing with the Bilderberg Group, he is showing real signs of de-coupling from the real world.

And for the political activists who call the shots in the PMO, what fun! There is nothing more entertaining than a furious business community. It is marvelous theatre and puts a smile on the face of every NDP swing voter. But, as “Pink Floyd” learned 25 years ago, the price of this chutzpah can be tens of thousands of lost jobs. Putting your finance minister on a collision course with the business community may not be smart policy.

Bill Morneau has announced a period of “consultation” on this tax bill for 2 short months. Thousands of business owners and professionals are today diverting time and money from their normal, revenue generating activities to write letters and prepare thoughtful submissions to him, explaining why a business should not be punished for merely existing. It is not too late for him to stop this bill, and punt this lousy idea into the Ottawa River.

Colin T. Brown is the Chairman of the National Citizens Coalition.