Trudeau doesn’t care about the environment, he only cares about gouging Canadian taxpayers. 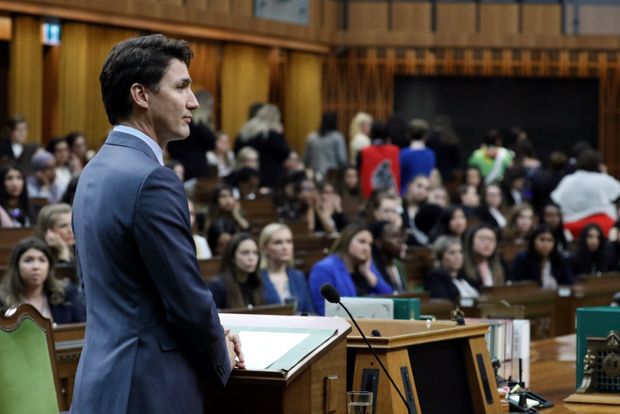 Justin Trudeau claims to care about the environment.

He claims that the carbon tax demonstrates his commitment to ‘climate action.’

And he claims the carbon tax will help the environment.

But just like his claims of ‘feminism’ and ‘reconciliation,’ all of those claims he makes about the environment are false.

The reality is, Justin Trudeau’s Carbon Tax is the biggest scam ever seen in Canadian history.

To start with, the carbon tax is obviously being used as a revenue extracting mechanism to steal money out of the pockets of working and middle class Canadians, while well-connected corporations get sweetheart exemptions.

And this reveals a fundamental contradiction in Trudeau’s messaging on the carbon tax, which further shows how much of scam it is.

Trudeau is simultaneously saying that climate change is an existential crisis for Canada and that the carbon tax is necessary to fight that crisis, while providing exemptions to big companies due to ‘competitiveness fears.’

In early August of 2018, the Trudeau government provided huge exemptions to large industrial emitters (but not the energy industry of course):

“Most firms that produce 50 megatons of carbon dioxide or similar levels of pollution a year won’t face any penalties until their emissions reach 80 per cent of the average within their specific industry. The previous limit was 70 per cent, according to a framework published July 27 by Canada’s environment ministry. The limit will rise to 90 per cent in four industries facing “high” competitive risks — producers of cement, iron and steel, lime and nitrogen fertilizers.”

Additionally, as was pointed out by Lorne Gunter in the Sun, oil from countries like Saudi Arabia happens to be exempt from the carbon tax:

“If the Liberals are so intent on cutting Canadians’ emissions by imposing a new carbon tax and by creating impossible new environmental standards for the approval of new pipelines, how come they let foreign oil enter the country without subjecting it to the same “green” taxes or the same environmental screening processes? Keep in mind, too, that Liberals let millions of tonnes of American coal come into Canada for export to the rest of the world without imposing a carbon tax, either.”

Trudeau can’t have it both ways.

If climate change is an existential threat that requires a carbon tax, how can there be even one exemption? Surely, any exemptions would be weakening something that is necessary for the survival of our nation, right?

On the other hand, if it’s possible to give exemptions to the tax, then the government must not truly see it as an existential threat. And if they don’t see it as an existential threat, and they’re willing to ‘adjust’ the carbon tax for political and economic purposes, then it means that the Trudeau government – behind the scenes of course – knows that they’re perpetrating a fraud on Canadians.

Trudeau and the Liberals can’t have it both ways.

The reality is that the Trudeau government is engaged in a disgusting and fraudulent attempt to manipulate the Canadian people.

Canadians are concerned about the environment, and want to ensure that we protect it for future generations.

The Liberals have used that legitimate concern, and twisted it into their so-called ‘climate action plan,’ which consists of a new tax that won’t do anything for the environment.

What it will do is take money out of people’s pockets at a time when we can least afford it. Many millions of Canadians are already teetering on the edge of financial disaster, and a new tax that makes everything more expensive is the very worst thing the government could be imposing.

And imposing that tax based on lies, fear-mongering, and manipulation is even more despicable.

The carbon tax must be fully repealed, not only because of its devastating impact on Canadians, but because of the message that would be sent if the tax remained in place. The elites would be emboldened to steal more of our money and more of our freedom based upon lies and scare tactics, and would continually escalate their deceptions. Not only would the carbon tax keep going up and up and up, but there would be new taxes, new regulations, new restrictions, all ‘justified’ by the ‘climate action’ lie.

Canadians must not let that happen. We must stop Justin Trudeau’s Carbon Tax, and end the obscene scam being perpetrated against us.