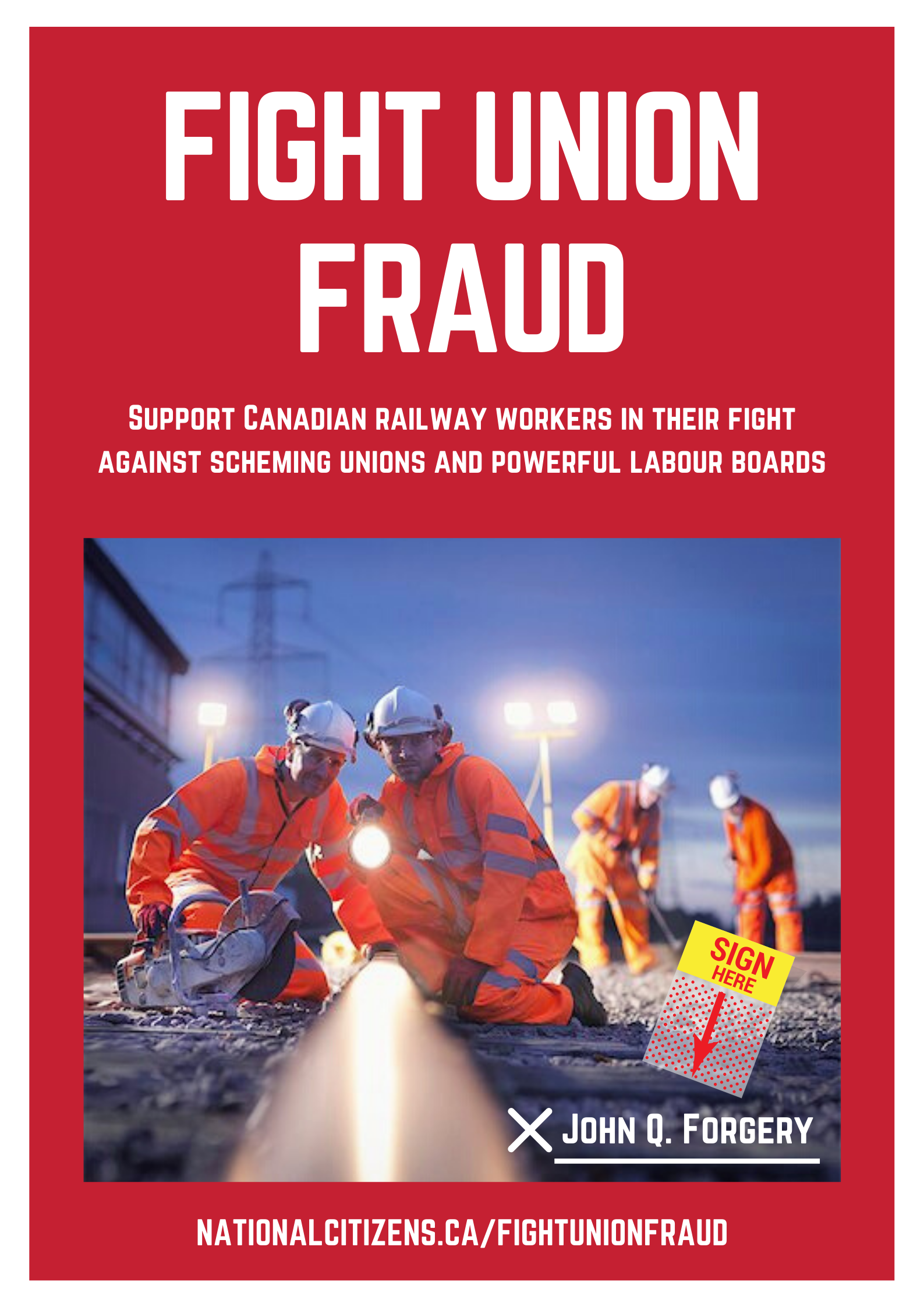 You couldn’t make this story up if you tried.

Justin Trudeau campaigned in 2015 with a promise to help Canada’s union bosses in two ways:

First, Trudeau would allow workers to be unionized WITHOUT a secret ballot vote. Union bosses could unionize by workers simply sending in a threshold number of union cards, dodging the democratic practice where all eligible workers are properly informed and then vote in an election. This shorter, undemocratic process increases the likelihood of union success since some workers succumb to pressure that they never experience in a secret ballot election. But it makes union card fraud easier as you will read about below.

Second, Trudeau would repeal the union financial disclosure law from the Income Tax Act so that unions could keep hiding their fraudulent activities.

Trudeau was elected and kept his promises to union bosses.

Employers and their labour lawyers have never trusted labour boards to properly check union cards for fraud. This is for good reason.

The NCC is now helping a group of railway industry workers fight union card fraud that was ignored under Trudeau’s new law by his Federal Labour Board – the Canada Industrial Relations Board. We are raising money to assist in paying their legal fees in a fight against a union aided by the Federal Labour Board.

Employees who inspect track for CN and CP Rail Company were unionized in December 2019 on cards without a vote. Before the Trudeau Labour Board issued its Order to unionize these workers, several employees told Trudeau Labour Board officials about the union card fraud they had witnessed or experienced, along with tales of union intimidation and lies.

On January 3, 2020, writing just one sentence for its ‘Reasons,’ the Board Order forced these employees to be unionized - writing in their Decision that there had been “no membership evidence irregularities or deficiencies”.

Unionization without a vote under Trudeau’s Federal labour law means that unions simply send to the Federal Labour Board union cards with the worker’s names and signature, along with a document that claims the worker paid a required $5 fee to the union. There is also a Certificate the union signs claiming that the signatures collected on the cards are legitimate, and that the worker in fact personally paid the $5 fee.

Typically, a Federal Labour Board ‘Investigating Officer’ phones some of the workers and talk with them about the circumstances surrounding their signed cards. Topics may include the union drive, their signature, and the $5 fee payment. That Board Officer also typically speaks to the union and employer separately. There may be written Submissions to review. Next, the Officer might write a Report about their review of any written Submissions and calls with the union and employer. Anything the Board Officer deems confidential such as phone calls with workers goes in a separate confidential Report to the Board Panel (akin to a 3 judge court) who then make a formal written Decision.

How This Story Actually Unfolded

As it turned out, a few employees who did not sign cards were called by the Investigating Officers. Since they didn’t sign cards, they found this to be strange and began to talk to each other. They noted that fellow workers who reportedly signed a card got a Board call. That made sense as the Board was investigating “membership evidence”. So why did they get a call when they hadn’t signed a card? They started to call more of their co-workers to try and figure out what was going on.

They discovered a pattern: employees who did not sign a card never got a Board call because there was no card for them to call about. And those that signed cards, did get a call. This made them realize that when the Board called them to inquire about membership evidence, they must have had a card in their name. When the Board asked them about signing a card, they all unequivocally stated that they did not sign a card.

One frustrated worker tried but could not get a straight answer about whether or not there was a forged card for him in three separate calls with different Labour Board officials.

The information given to the Board Officers by all these workers should have prompted ANY Board Officer to conduct a further investigation of whether forgery or other misconduct was at play and to make certain such was put before the Board Panel to be fully evaluated and any Decision could be made. Instead, the Board completely failed these employees by deviating from its duty to follow the law when investigating and assessing the cards submitted to the Board.

As if all this fraudulent activity by the union was not enough for the Board to conduct a deeper investigation and ultimately dismiss the union’s application, the Board heard further evidence of a probationary employee being threatened to sign a card. The employee was told that not signing would mean the union get him terminated from his job. This threat caused him to sign a union card under the fear of losing his employment. When he told this all on the phone to the Board Officer – no follow-up questions were asked. He left the call feeling nothing could be done.

Other workers reported to the Board how the union tricked them into meeting rooms in hotels and pressured them into signing. Some did sign – BUT they did not pay the legally required $5 fee. Instead, union organizers or other employees paid for them. This was illegal. The union was aware of this.

The $5 fee must be paid individually by any employee signing up for unionization. While this may seem like a small technicality, it is a very important requirement in labour law. The fee is to ensure that a worker who signs a union card understands the seriousness of their actions when required to personally pay for their membership in the union. Especially in light of the fact that in card-based unionization, the right to a vote is dispensed with. The $5 fee is a critical part of the legal process. To this end, Unions are required to sign a Certificate of Accuracy which renders fraudulent any union card that did not have the signer pay the $5 fee. The law is 100% clear on this point. The worker must pay the fee, or the card is fraudulent and illegal. Signed union cards AND proof that the signer paid the $5 fee together make the “membership evidence”. The Trudeau Labour Board knew this – and did nothing.

In this case, not only did the main union organizer repeatedly offer to cover and actually paid the $5 fee on behalf of multiple signers, he instructed employees to lie to the Board Investigators when they were conducting an investigation and asking about who made the payment. As it turned out, some employees chose NOT to lie to the Board. This caused the union organizer to publicly lament that some employees had “screwed up” by telling the Board they didn’t pay the fee themselves.

The Trudeau Labour Board was told about all these accounts and chose to sweep them under the rug. The Labour Board wrote an empty Decision that simply stated it found “no membership evidence irregularities or deficiencies”.

The employer challenged the above Labour Board Decision and was summarily dismissed. This acceptance of fraud, supported by the Board upset these workers even more than their frustrating calls with the Board. It should come as no surprise, that this slap in the face led to their Labour Board Applications to not only expose the union’s fraud and the Federal Labour Board but to become union free again.

The whole process of card-based unionization, unlike a secret ballot vote, is fraught with bias and unsurprisingly, is favoured by union bosses. Since a worker’s right to a vote is taken away, the process of unionization by cards requires stringent safeguards and procedural compliance in order to ensure it isn’t abused by unions hankering to unionize and ultimately, collect dues.

In this case, the QCCC union abused every procedural requirement to claim it had over 50% of the workers signed up. What started out with suspicious employees concerned about whether their name was on cards that they did not sign, netted into nine Applicants who came forward with evidence of fraud and intimidation. Worst still, after the Board Investigating Officers became aware of the facts, they chose to ignore it, allowing union corruption and its reward of a newly unionized group of workers to win the day. These workers will have to pay a hidden $250 Union Initiation Fee and regular Union Dues once there is a collective agreement.

Perhaps the most troubling part of this tale, is the Board’s Certification Order granting QCCC as the bargaining agent for these employees. The Order was completely silent about the fraud and intimidation that the Board learned about firsthand from these nine employees. Ultimately, the Board dismissed what it heard and stated that there had been no membership evidence of irregularities or deficiencies. That was NOT the truth. That was a coverup of union fraud.

Nine workers are now represented by a Union that was certified through fraudulent and intimidating tactics. Nine workers subsequently got kicked in the teeth by a Board that heard their statements but chose to ignore them and certify the union regardless. These employees have found representation and deserve to have their day in court. Give generously to help raise the funds for their legal fight. No worker should ever be made to feel like a voiceless victim by scheming unions or the powerful Labour Boards that help cover their corruption.