We Must Discover Which Of Our ‘Leaders’ Are Loyal To Canada, And Which Are Loyal To The Chinese Communist Party 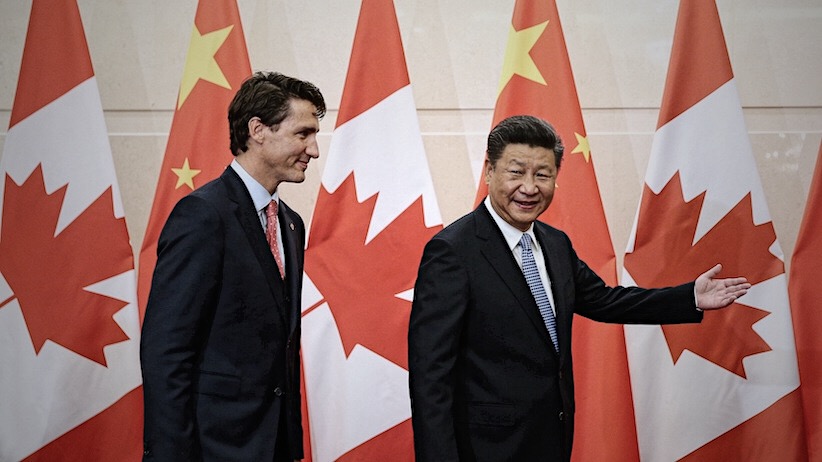 Disloyalty to the country.

It’s something we’ve rarely discussed in contemporary politics, with some feeling that the era of people betraying their own nation to a foreign power is long over.

But now, we’re discovering that the issue of loyalty is more important than ever before.

Amid the ongoing Coronavirus Crisis, which has cost countless lives, devastated our economy, and restricted our freedom more than any crisis in recent history, we are witnessing the unimaginable damage wrought by the lies, deception, and viciousness of the Chinese Communist Party.

The CCP (an organization founded upon the deaths of millions) first victimized the Chinese People. As you know, the initial suppression of Coronavirus information by the CCP (who jailed doctors and journalists) let the virus spread in China, and that – combined with the lies of the CCP & the CCP-controlled WHO – let the virus spread around the world, including here in Canada.

Now, much of the failed response has been what we unfortunately have come to expect from government: Incompetence, short-sightedness, vanity, political correctness, and a lack of imagination or common sense.

However, the willingness of some of Canada’s supposed ‘leaders’ to follow the corrupted WHO rather than take action to protect Canadians raises some very disturbing questions.

And to get a sense of what those disturbing questions are, we need to think about what our close ally Australia has experienced when it comes to CCP Infiltration of their country.

Duncan Lewis, the former head of Australia’s intelligence agency, has warned that China is attempting to “take over” Australia’s political system.

As reported by the Guardian, “The retired Asio chief Duncan Lewis has reportedly warned that the Chinese government is seeking to use “insidious” foreign interference operations to “take over” Australia’s political system.

Anyone in office could be a target and the strategy’s full impact might not be apparent for decades, Lewis is reported to have told the political journal Quarterly Essay.”

“Espionage and foreign interference is insidious,” he said. “Its effects might not present for decades and by that time it’s too late.

“You wake up one day and find decisions made in our country that are not in the interests of our country.”

Citing fears of legal threats from China, the original publisher backed off, showing how much fear and influence China already posses in Australia.

As reported by NPR, "I was shocked," remembers Hamilton. "I felt betrayed. We knew this was a difficult subject. We knew that Beijing has some powerful friends in Australia. We knew that the Chinese government would be highly critical of the book and of me. Of course, it was great comfort to have a really good, solid publisher behind me, and all of a sudden I was left out there on the battlefield, looking over my shoulder, saying, 'Where is my support?' "

"It's a massive red flag," says Hamilton. "And if Australia capitulates on this question, in other words, no book seriously critical of [the] Chinese Communist Party will be published in Australia. I mean, this essentially means we've sacrificed our democratic freedoms."

Three publishers refused to publish the book, before a fourth decided to do so.

A government report initiated in 2016 revealed that the attempt to influence the political system had gone on for over a decade, as reported by Australia’s ABC:

“A top-secret report has raised concerns that the Chinese Government has attempted to influence Australia's political parties for the past decade.

One intelligence source told the ABC there had been infiltration at every layer of Australian Government, right down to local councils.”

And, in one of the most disturbing examples of attempted subversion, Australian Liberal Party member Nick Zhao (who had many ongoing legal problems) said he was offered $1 million by agents of China’s Communist Party to run for office and ‘infiltrate’ Parliament.

Zhao did the right thing, refusing the offer and informing Australia’s spy agency.

He was later found dead in a Melbourne hotel, with the question of whether he was killed by angry ‘business’ associates’ or the CCP left up in the air.

What does this mean for Canada?

You could be wondering, what does all this Australia stuff have to do with Canada?

Well, despite how bad things already are in Australia, they may be even worse here.

In fact, it’s so concerning that Clive Hamilton says he is “deadly worried.”

Here’s an excerpt of an interview Hamilton did with the National Post:

Question: “Some experts suggest the problem of Chinese soft-power interference is much more pronounced in Australia and New Zealand than here. Do you agree?”

Answer: “I think it’s more of a problem in Canada. Yes, Australia’s economic dependence is higher — in terms of trade — but when I look, as I have been doing, at the subtle but intense influence of China on Canadian institutions — parliaments, provincial governments, local governments, universities, the intellectual community, the policy community — it makes me deadly worried.”

And the infiltration appears to be deep within our political system:

“When I was last in Canada — in Ottawa, a few months ago — I was pretty dismayed at the extent of Chinese Communist Party (CCP) influence in the federal Parliament. I should probably not say any more to stay on the right side of the libel laws.

I have also been dismayed by the brazenness of friends of the Chinese Communist Party and their activities. I’m thinking, for instance, of Chinese students on university campuses, and the really extraordinary attack on the Tibetan student who was elected … president of the (University of Toronto Scarborough campus) student union.”

Hamilton’s remarks are deeply concerning, and what this means is that it’s entirely possible that a portion of Canada’s government is in effect a foreign agent, a tool of a hostile foreign power, committing near-treason on a daily basis under the cover of darkness.

CCP Coronavirus raises the stakes to life and death

In the past, we could have looked at this subversion of our nation as ‘just’ an economic betrayal. But now, with not only our economy – but also the lives of the innocent Canadian People at stake due to the CCP and those who failed to protect our nation, we are seeing the true scope of the threat. Our own lives, our own families, our own friends, our loved ones and our nation are all at risk because of the lies of the CCP.

And those lies were allowed to spread the virus within our nation because of politicians who were more worried about political correctness than about their duty to Canadians.

In fact, some ‘leaders’ even said the ‘real threat’ was racism and prejudice, before the virus was allowed to sweep through Canada and upend our lives.

Now, our focus is rightfully on getting through this crisis.

But when it is over, we must launch an immense and unprecedented investigation into this subversion of our country, and find out which of our politicians are loyal to Canada, and which are loyal to the CCP.

We cannot risk another crisis of this magnitude. We cannot let our nation be corrupted and subverted from within. We must find out who we can trust, and who is serving a foreign power instead of serving Canada.

After all, if we aren’t sure who within our midst we can trust, and who we can’t, how could our country remain stable? How could we trust anything, or anyone in a position of power?

And those who oppose this investigation will themselves raise suspicions, because all of our leaders, politicians, and bureaucrats should relish the opportunity to show their loyalty to our country and our people. After all, loyalty to Canada must be the very foundation of any public servant, if ‘servant’ is to have true meaning.