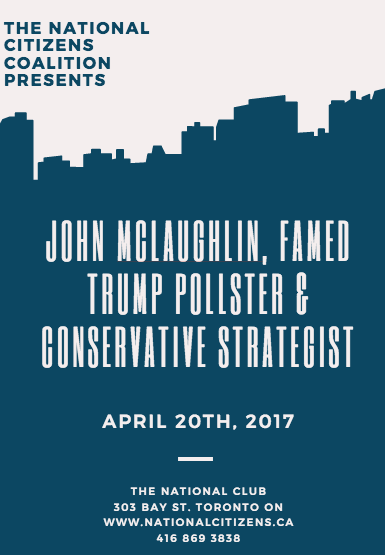 The National Citizens Coalition is proud to be welcoming famed conservative pollster and strategist John McLaughlin to the National Club in April for a presentation on his first-hand experience with the Trump campaign, how he was able to predict the upset, and the effects it will have on Canada and abroad. Guests are welcome, and noon cocktails will be followed by a sit-down lunch and presentation.

Tickets are $75 and available for purchase online through Eventbrite or by calling the NCC office at (416) 869-3838 during business hours. A special discount is available for a table of 10. 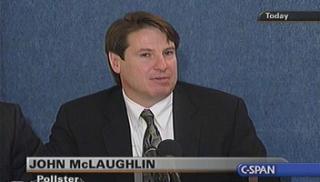 More about our guest: John McLaughlin has worked professionally as a strategic consultant and pollster for over 30 years. During this time he has earned a reputation for helping some of America’s most successful corporations and winning some of the toughest elections in the nation. His political clients have included former Presidential candidates Steve Forbes and Fred Thompson, former California Governor Arnold Schwarzenegger, former Florida Governor Jeb Bush, Georgia Governor Nathan Deal and 22 current and former U.S. Senators and 20 current Republican members of Congress.

Internationally, John has done work in Israel for Prime Minister Binyamin Netanyahu, The Conservative Party in the United Kingdom and for Prime Minister Stephen Harper of Canada. He is founding partner of Opiniones Latinas, a public opinion research company dedicated to researching opinions of Latinos nationwide. John has appeared on every major broadcast and cable channel, as well as prominent radio talk shows across America. His articles have been published in a wide range of publications including National Review, Middle East Quarterly, Campaigns and Elections, and The Polling Report. His work has been recognized by winning Telly and PR Week Campaign Awards. John is a graduate of Fordham College (B.A) and holds an M.B.A. from Fordham University with concentrations in Finance and Quantitative Methods. He is also a member of MENSA.